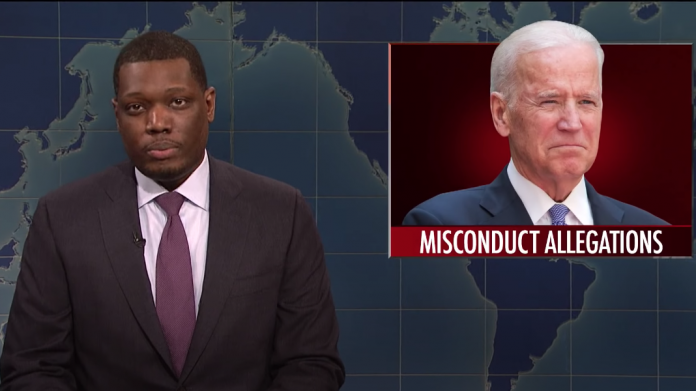 Saturday Night Live is a radically left-wing “comedy” show that is often used as a platform to simply bash President Trump and Republican politicians.

Occasionally, they will target a Democrat in their comedy sketches, though it’s not common.

But Saturday Night Live just bashed Joe Biden so badly in this new comedy sketch it could end his campaign before he’s even secured the nomination.

In a hilarious bit of irony, Saturday Night Live may have accidentally gone too far and dealt serious damage to Joe Biden’s campaign.

A slew of popular and hypocritical celebrities are giving the former Vice President a pass on these allegations.

The same “leaders” pretending to be champions of the feminist and #MeToo movement are completely ignoring Tara Reade’s claims in hopes they can defeat Trump.

Next, Saturday Night Live comedians joked about Joe Biden’s failing memory, making him appear like a complete idiot in front of millions of Democrats and Independents watching.

Joe Biden’s memory and mental state have become growing concerns among Democrat operatives, politicians, and members of the media.

Now, Democrat voters are now worried Biden is not in the proper condition to take on President Trump in an intense campaign.

Biden is currently benefiting from the coronavirus lockdown orders across the country.

If he were attending more campaign events or facing Donald Trump in a debate, he would reveal how diminished his mental state truly is.

The Democrat National Committee (DNC) and the mainstream media are shielding Biden from public scrutiny as best they can.

But voters are beginning to identify signs of his deteriorating memory and mental state.

Democrats could have a tremendous crisis on their hands and be forced to replace Biden with another candidate.