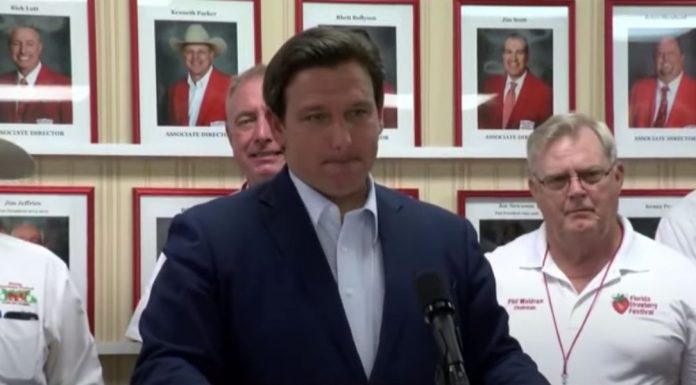 He is one of a growing number of Republicans willing to push back against the radicalism of the Left.

And Ron DeSantis just sent every Hollywood leftist into a complete meltdown.

Ron DeSantis has shown how Republicans can be effective when they’re willing to wield state and local power to fight the Left, who are more than willing to crush the Right any chance they get.

That is perfectly reasonable to any sane person, so of course the Left went insane when DeSantis signed it.

They launched a propaganda war calling it the “Don’t Say Gay” bill, which is wildly inaccurate.

And Hollywood leftists got involved to pressure Disney to put the screws to DeSantis and his state.

“I also believe you deserve an explanation for why we have not issued a statement. We are going to have a more fulsome conversation about this at the company-wide Reimagine Tomorrow Summit in April, but I will preview that discussion now as it is so timely. As we have seen time and again, corporate statements do very little to change outcomes or minds. Instead, they are often weaponized by one side or the other to further divide and inflame. Simply put, they can be coutnerproducitve and undermine more effective ways to achieve change.”

That triggered outspoken liberal director and writer Judd Apatow to go after Disney.

His customers are children. This bill harms children in ways that will damage many for life. @Disney should never be a company that doesn’t stand up for the safety and support of all children. They certainly should never financially support those who attack children like this. https://t.co/7AfmgrKAvp

Apatow constantly pesters companies to do the bidding of the political Left.

He has led numerous (failed) boycotts against Fox News host Tucker Carlson to get him removed from the air.

David Hogg, the braindead liberal who was part of the astroturfed anti-gun March for Our Lives movement, promoted a student walkout over the bill, and liberal actor Josh Gad tweeted in support:

“As a Floridian, I am so blown away by these kids. This bill is discrimination at its most base. There isn’t a political issue…this is about humanity and decency. There are nuanced issues in this intense political climate. This is not one of them.”

As a Floridian, I am so blown away by these kids. This bill is discrimination at its most base. There isn't a political issue… this is about humanity and decency. There are nuanced issues in this intense political climate. This is not one of them. #LetFreeFloridaSayGay https://t.co/dXuL59m7hb

Clearly Gad did not read the bill – he’s simply virtue-signaling.

If he had read the bill, he would know that there is no discrimination taking place.

Kids eight-years old and younger do not need to be taught about sex and radical gender expression.

Mark Hamill simply tweeted the word “gay” dozens of times in a row, which is essentially the level of understanding of virtue-signaling celebrities.

Hopefully Republicans, and perhaps more importantly corporations, are catching onto this game.

All people need to do is stand up to these leftist crybullies, and they will move onto another “cause” that they’ve been propagandized to care about.