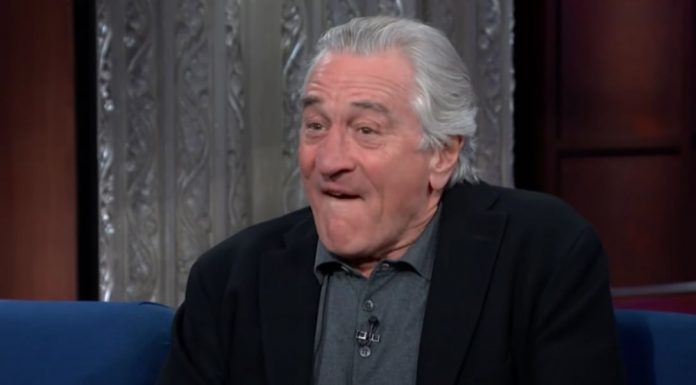 Robert De Niro has one of the worst cases of Trump Derangement Syndrome.

The actor has spent the past four years attacking Donald Trump nonstop.

Since Donald Trump was elected in 2016, Robert De Niro has spoken out publicly more than he ever has in his entire career.

De Niro has a terminal case of TDS, and he wants everyone to know about it.

He’s railed against Trump in numerous interviews, he’s chided him during awards shows, and he even played Robert Mueller on Saturday Night Live to fulfill his fantasy of taking down Trump’s Presidency.

And even though Joe Biden has the inside track to the Presidency, despite ensuing legal challenges to the 2020 election, De Niro isn’t letting up on his Trump hatred.

In an interview with Ari Melber on MSNBC, De Niro said:

“It’s the same playbook as Mussolini, as Hitler, as wannabe dictators. It’s what they’re going to do for the people, make Germany great again, make Italy great again, make America great again. It’s all appealing to the worst prejudices, the worst weaknesses of the public and instead of leading them and guiding them and being someone that they can look up to…And when the public is not right, you have to be [there] to do the right thing and set an example for them. And if you don’t, then we’re going to be where we are today.”

This type of overheated rhetoric has become commonplace over the past four years.

De Niro and other leftists claim Trump wants to be a dictator, but he’s cut taxes, reduced the power of the executive branch through deregulation and reversals of onerous Obama-era policies, he’s obeyed every court order, he refused to seize power during the coronavirus pandemic, and he’s trying to pull troops out of foreign entanglements.

Dictators do the exact opposite.

The problem with his argument is that it’s the Democrats who have been breaking with traditional norms.

The Democrats want to pack the courts with leftist judges in order to “depoliticize it,” end the Senate filibuster, grant statehood to Puerto Rico and Washington, D.C., and legislate by “pen and phone” as Barack Obama famously did.

De Niro then turned his attention to Trump voters, “I’m not like political, but I was so angry and so enraged and confounded that he would actually behave the way he did and that people bought it . . . Now I see many, many, many people in the country feel this way. I’m sad about other people who don’t. They’ve accepted him and would have voted for him and have voted for him. I don’t know why.”

Since De Niro is admittedly not “political,” he’ll never fully understand why 72 million Americans voted for Donald Trump, or why he got the largest Republican share of the nonwhite vote since 1960.

Trump spoke to issues that had been plaguing Americans for years: border security, loss of manufacturing due to unfettered globalization, and the financial human toll of nonsensical foreign wars.

The American people spoke, but De Niro couldn’t hear from his ivory tower.