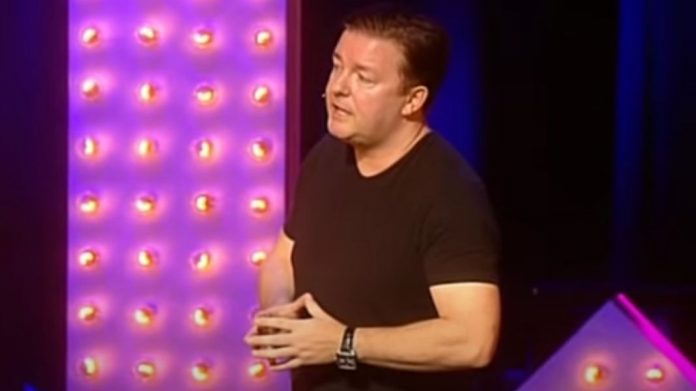 Hollywood celebrities have become more insufferable than usual with their finger-wagging.

But comedian Ricky Gervais has been a breath of fresh air in this current moment of madness gripping the western world.

And Gervais called out the outrage mob for the terrible thing they’re doing.

More and more liberals are finally waking up to the fact that the Left is actually illiberal.

They don’t believe in free speech, freedom of association, freedom of religion, or anything else that stands in the way of their authoritarian ideology.

Leftists have come up with the insane notion that speech literally equals violence, and thus “hate” speech must be shut down.

Over the past few years, the so-called mainstream media have written several articles talking about how free speech is “problematic.”

Most members of the Left either wholly endorse the insanity, or simply put their heads down and go along to get along.

But British comedian Ricky Gervais isn’t having any of it.

He’s sick and tired of the “woke” mob trying to get people shut down.

“If it is choosing not to watch a comedian because you don’t like them, that’s everyone’s right. But when people are trying to get someone fired because they don’t like their opinion about something that’s nothing to do with their job, that’s what I call cancel culture, and that’s not cool.”

This is exactly right.

But the illiberal Left can’t tolerate “harmful” speech, even if they don’t listen to it.

All dissenting opinions must be snuffed out.

There are thousands of minions on Twitter itching to start a #cancel movement against anyone guilty of wrongthink.

“You turning off your own TV isn’t censorship. You trying to get other people to turn off their TV because you don’t like something they’re watching, that’s different.”

Leftism is an expansionist ideology, so it can’t can’t allow for the acceptance of other faiths.

If people are allowed to hear differing opinions, they’re far less likely to buy into the progressive lie.

Gervais has become an usual warrior in the culture war against the Left because he’s unabashedly left-wing.

But Gervais has proven that a huge portion of the Left no longer believes in free speech or the First Amendment more broadly.

And don’t even get them started on the Second Amendment.