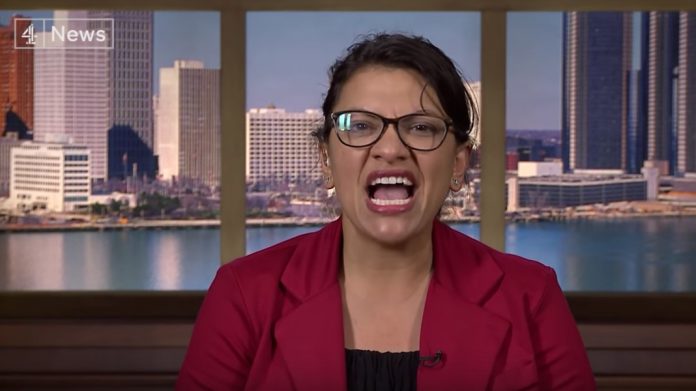 U.S. Representative Rashida Tlaib (D-MI) made headlines becoming one of the first Muslim women members of the U.S. House.

But she’s faced scrutiny over her connections to radical anti-Israel activists and for yelling “we’re gonna impeach the motherf****r” [Trump] hours after being sworn in.

Now, her career could be over after this jaw-dropping report was released.

Filings show that the newly elected firebrand raked in nearly $50,000 for being a candidate for office.

The problem: a candidate can only draw a salary from the official campaign for the duration of their candidacy.

FEC reports show payments totaling $17,500 were disbursed to her bank account AFTER her election which is a major violation of campaign finance laws.

From the Washington Examiner:

“The FEC specifies that a candidate no longer qualifies for salary payments from the day after the general election. The two salary disbursements were made on Nov. 16 for $2,000 and on Dec. 1 for $15,500.

In total, Tlaib drew a salary upwards of $45,000 during her eight months as a candidate, with biweekly recurring disbursements of $2,000 and the final sum of $17,500 after the election had concluded.”

These allegations come at the same time as her pal, Rep. Ilhan Omar (D-MN), drew President Trump’s wrath because of her recent anti-Semitic tweets.

Even Speaker Pelosi and other Democrats joined in with a prepared resolution declaring the House opposed anti-Semitism and bigotry.

On top of it all, another firebrand who was thrust on the national scene, Alexandria Ocasio-Cortez, could also be facing major campaign finance violations.

Ocasio-Cortez’s campaign allegedly funneled nearly $1 million of dark money to PACS in what some political experts say appears to be a way to skirt campaign finance laws.

Tlaib, Omar, and Ocasio-Cortez have been pushed on the American public as the future of Congress.

But their careers could flame out quickly.

Do you think the FEC should probe into Rep. Rashida Tlaib and Rep. Alexandria Ocasio-Cortez further? Should they be forced to resign if the allegations prove to be true?