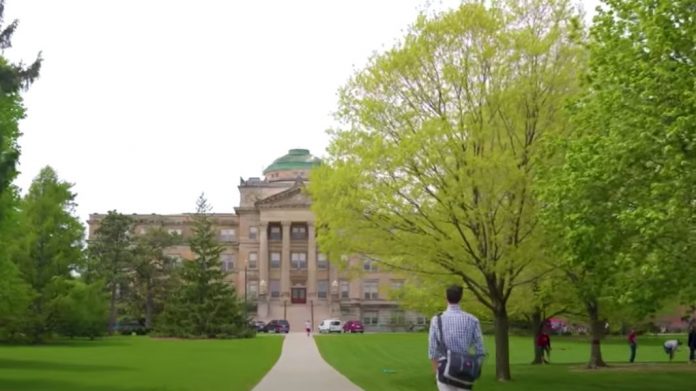 Leftist professors and administrators have created a toxic and oppressive environment for anyone who dares to think differently.

Now a radical professor announced he’ll kick students out of class for this jaw-dropping reason.

College campuses have become completely corrupted by the Left.

Academia always leaned Left, but now the balance is irreversibly out of whack and liberals have been replaced by radicals.

This type of breakdown can be found at virtually every college across the nation, even in more right-leaning parts of the country.

Campuses in red states are far from immune to the leftist virus.

For example, at Iowa State University, located in a state that Donald Trump won by nearly ten points in 2016, one professor released a syllabus that states students will be dismissed from class for a shocking reason.

An English professor sent the following to her students:

“GIANT WARNING: any instances of othering that you participate in intentionally (racism, sexism, ableism, homophobia, sorophobia, transphobia, classism, mocking of mental health issues, body shaming, etc) in class are grounds for dismissal from the classroom. The same goes for any papers/projects: you cannot choose any topic that takes at its base that one side doesn’t deserve the same basic human rights as you do (ie: no arguments against gay marriage, abortion, Black Lives Matter, etc). I take this seriously.”

So the professor explicitly says that opposing Black Lives Matter, an avowedly Marxist organization, or abortion is grounds for dismissal from class.

This is a startling violation of free speech, and highlights the stifling monoculture that exists on campuses.

Saying students aren’t allowed to challenge Black Lives Matter or abortion is tantamount to saying studetns are not allowed to think.

This is proof that universities have become nothing more than indoctrination mills.

It’s arguably the source of nearly all the problems that ail the country; bad ideas incubate in universities, then spread everywhere else.

Luckily, one student leaked the syllabus, and the Iowa State was forced to respond in opposition to the blatant abridgement of free speech.

However, this is just one example at one college.