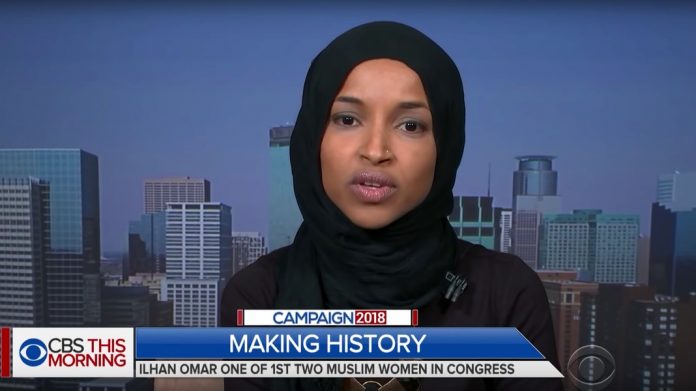 Fresh off her victory changing House rules to allow her to follow Sharia Law, Rep. Ilhan Omar is back in the news for all the wrong reasons.

She was tossed a softball in a CNN interview.

But Omar swung and missed when she gave this answer.

In a telling interview on CNN, Ilhan Omar defended her tweet that invoked Allah to defeat the Israel “Evil.”

Minnesota Democratic Rep. Ilhan Omar defended asking Allah to help the world see how “evil” the actions of the nation of Israel are and how Israel has “hypnotized” the people of the world during a segment on CNN Thursday.

Hosts brought up a tweet the freshman congresswoman posted in 2012: “Israel has hypnotized the world, may Allah awaken the people and help them see the evil doings of Israel.”

Ilhan Omar refused to apologize for her incendiary tweet, instead claiming she didn’t know how it could possibly be offensive.

And if that wasn’t enough, Renewed Right reports that in the same interview, Omar took the opportunity to promote and an absurd conspiracy theory about Donald Trump and Senator Lindsey Graham that is gaining steam on the left.

The truly startling thing is, in the wake of these latest outrageous statements from Ilhan Omar, Democrat Party leaders still refuse to distance themselves from the Minnesota Democrat.

But we want to know what you think. Should the Democrat Party censure Ilhan Omar? Should she resign from Congress?

Let us know your thoughts in the comment section.