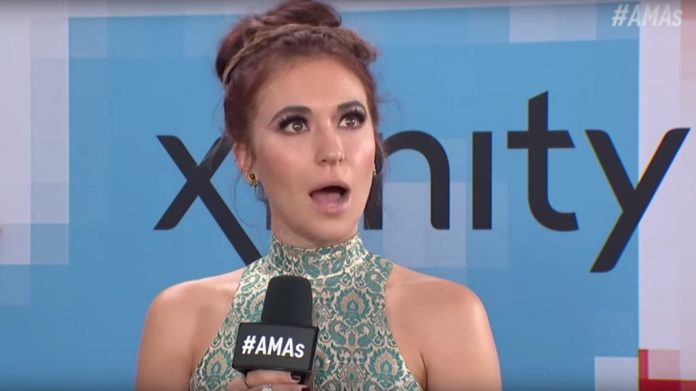 And “Christians” are giving into their demands regardless of what the Bible says.

And what this Christian music artist said about the Bible will infuriate you.

Lauren Daigle, the Christian music artist behind the popular songs “You Say” and “Trust in You,” has reached new levels of mainstream success.

She even recently appeared on Ellen DeGeneres’ show to perform for millions on live TV.

However, she seems to be departing from her Christian roots.

In a recent interview she was asked if she thought homosexuality is a sin, to which she responded she couldn’t “honestly answer that.”

Popular contemporary Christian music (CCM) artist Lauren Daigle said this week on the “Domenick Nati Show” that she can’t answer whether homosexuality is a sin because there are people that she loves that are homosexual and she is not God. She noted that people should read the Bible to find out for themselves, and let her know what they learn.

“Do you feel that homosexuality is a sin?” Nati, whose broadcast is aired on iHeart Radio, asked forthrightly.

“You know, I can’t honestly answer on that, in the sense of I have too many people that I love—that they are homosexuals,” Daigle, known for the hits “How Can It Be” and “You Say,” told the celebrity publicist.

“I don’t know. I actually had a conversation with someone last night about it. I can’t say one way or the other. I’m not God,” she continued. “So, when people ask questions like that, that’s what my go to is. Like, I just say, ‘Read the Bible and find out for yourself. And when you find out, let me know because I’m learning too.’”

Lauren Daigle has either never read the Bible, or is just playing ignorant to appease the masses.

1 Corinthians 6:9 clearly states “Or do you not know that the unrighteous will not inherit the Kingdom of God? Do not be deceived: neither the sexually immoral, nor the idolaters, nor adulterers, nor men who practice homosexuality.”

Unfortunately, this is nothing new for her sect of Christianity.

Carl Lentz of Hillsong NY was on Oprah’s show in 2017 when he told millions to “live to their own convictions” when asked if abortion is sinful.

These “hip” and “mainstream” Christians are just shelving the wisdom and truth of the Bible in favor personal fame and wealth.

And they are kowtowing to the demands of the radical Left so they can enjoy mainstream success.

Do you think Lauren Daigle is being honest? Let us know what you think in the comments below.