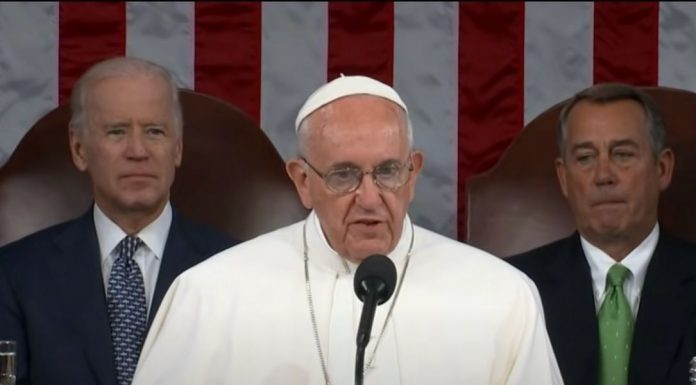 Pope Francis has been a champion of one progressive cause after another.

That’s why leftists tolerate him despite his staunch pro-life views.

But Pope Francis went full socialist with one jaw-dropping statement.

Pope Francis is no stranger to advocating for left-wing causes.

He has called for drastic measures to fight climate change, and he has called the global economic system “perverse.”

Now the Pope is openly praising the taxman and the redistribution of wealth.

He argued that taxation was a “guarantee of equality” and a “sign of legality and justice.”

However, many would argue that taxation represents the exact opposite—taxes concentrate power and money in the hands of a few who often abuse their station and plunder the resources of a country.

Venezuela is the latest example of a country that went socialist, and the people suffered squalid conditions while the people in government became filthy rich and got to hang out with Western elites.

“It must favor the redistribution of wealth, looking out for the dignity of the poorest who risk always ending up crushed by the powerful…Let us work so that the culture of the common good grows and — this is important — so that the universal destination of goods is taken up seriously.”

The “redistribution of wealth” and concern for the “dignity of the poorest” are always how socialist governments sell their program.

It’s “perverse” free markets and rule of law that lift people out of poverty, not socialist policies.

He said that “we shouldn’t fall into a health care system that you pay for, where the poor don’t have a right to anything.”

Rights don’t come from the government.

Healthcare cannot be guaranteed as a right because someone else must provide it.

The quasi-socialist economies of Europe have been in gradual decay for a long time due to their bloated healthcare systems and insolvent pension funds.

Government intervention is one of the reasons healthcare costs are what they are in the first place.

Also, it seems highly unlikely that Pope Francis would be subject to rationed care in Italy’s healthcare system.

Another lightly discussed aspect of socialized medicine is that elites from countries with such systems go to America to avail themselves of the best doctors without having to wait months for a simple visit with a specialist.

Taxation is not a “sign of legality and justice.”

It’s a lot closer to theft.