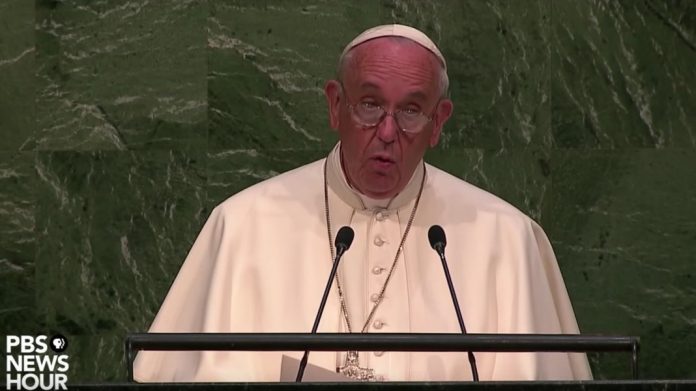 There’s one major Catholic figure Pope Francis is terrified of above all.

He was even forced out of his position in the church over that.

And that top critic just dropped a truth bomb that leftists don’t want you to hear.

Today, most religious leaders simply feed people what they want to hear.

They know that they can retain membership in their church if people are constantly hearing things that make them feel good.

But there are some who aren’t afraid to tell it like it is.

And former Cardinal Robert Sarah is one of those people.

Sarah has for decades spoken the truth, and exposed evil no matter where it rears its ugly head.

He has often criticized Pope Francis, which is why many believe the Pope accepted his resignation last year.

It is customary for Catholic Cardinals to submit resignation letters to the Pope on their 75th birthday.

But if they state that they wish to remain in the Church, the Pope generally doesn’t accept the resignation.

In the case of Sarah, Pope Francis quickly accepted his resignation.

And with that he said this week, it isn’t surprising why.

Speaking to Catholic Arena, Sarah warned that Christianity is on the decline and western society is “lost” because people have “forgotten how to be silent.”

“In our churches there is too much noise, so it’s not a place where you can encounter God silently,” said Sarah, adding that “silence makes man more similar to God because God is silence, he talks in silence.”

He goes on to assert that the number of people holding the Christian faith is declining because people spent too much time “talking” and “there is no silence.”

“Without God, without silence, we are lost . . . western society seems to be lost because when we are cut from God, we are lost,” said Sarah.

“It’s like a tree without roots, it’s like a river without the fountains, God is our fountains, if we are cut from God, we are lost and God is silent,” he added.

He goes on to state that “western civilization is in a profound state of decadence and ruin” due to people’s obsession with materialism and that the situation is similar to right before the collapse of the Roman Empire.

“The elites care for nothing but increasing the luxury of their daily lives, and the people have been anaesthetized by ever more vulgar entertainments,” said Sarah.