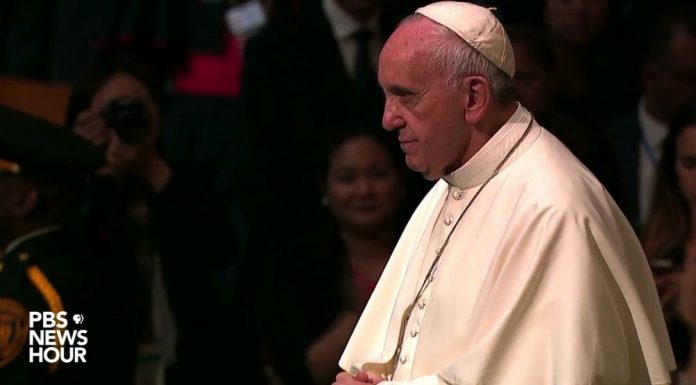 Two of the most powerful leftists in the world are Pope Francis and Joe Biden.

The duo just made it clear what political beliefs the Vatican will be pushing moving forward.

Because Pope Francis just signed off on Biden’s radical agenda by demanding priests give him Communion no matter what.

In a world that is looking closer to a unified political unit, it’s important to pay attention to who the big players are in world politics.

And it is without question you have Joe Biden as one the leaders of the world’s leftists movement.

He might have the look and cognitive ability of a dried raisin but he is still a leader of the world.

Biden on the “vaccine”.
Mumbles incoherently about nothing for 30 seconds.

CNN put words in his head.
This is pathetic. pic.twitter.com/M0yhU7y5GV

And on the other side of the Atlantic you have Pope Francis who has ignored the politically neutral papacy stance and has instead embraced leftist policies with open arms.

But Catholic Church members in the United States have blatantly rejected Biden’s policy.

And it’s been so bad for Biden in his own church that the debate over denying him Communion has been a hot button issue.

In fact, many bishops in the Catholic Church in the United States believe that they need to ban Biden from the most sacred thing in the Church.

Pres. Biden responds to question on “teaching document” from U.S. Catholic bishops that may deny communion to pro-abortion rights Catholics.

"That's a private matter and I don't think that's going to happen." pic.twitter.com/zu5xmHXrQ9

Biden met with Pope Francis late last week for what was supposed to be about leftist talking points but it seems to be about saving Biden’s butt in the Catholic Church.

Even with Biden’s stance on killing babies in the womb, Pope Francis supposedly told Biden that he can still get Communion in the Catholic Church.

Biden claimed, “We just talked about the fact he was happy that I was a good Catholic and I should keep receiving Communion.”

The sad thing is that it’s most likely true.

A Pope who bashed Trump over a wall but embraces Biden for killing babies should have no place in the Catholic Church.

But like everything else in our society, the Left has taken over the leadership of the Catholic Church.