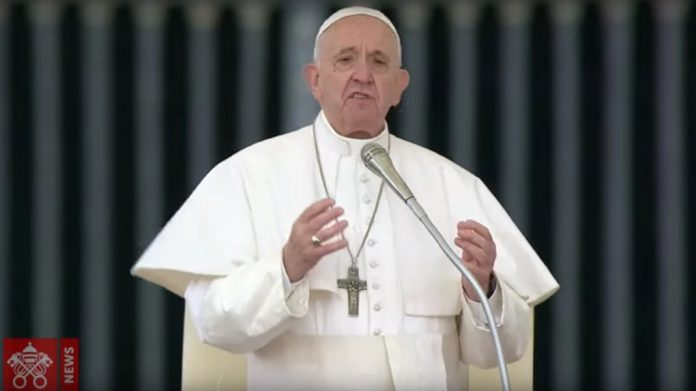 Pope Francis has spent his time in power pushing left-wing nonsense on the Church.

His fervor has only become more extreme in recent months.

And Pope Francis’ left-wing agenda reached a fever pitch with this priest being fired.

The Catholic Church has long been a bulwark against the far-left’s agenda around the world.

But the Left has been trying to change that, and instead use the Church as their own weapon to promote their agenda.

Pope Francis has been a huge ally in that fight.

He has pushed climate change, socialism, and encouraged Catholics to focus less time on fighting abortion and gay marriage.

And he has also purged some of the most conservative voices in the Church.

Catholic bishops across the world also appear to have taken up that fight in the era of Pope Francis.

In recent days, a bishop has asked for the resignation of Father James Altman, who is known for his outspoken conservative views, and refusal to force masks in his parish.

Fr. Altman serves as the pastor of St. James the Less Catholic Church in La Crosse, Wisconsin, and announced last week that he was asked to resign.

“As the bishop has stated to me: I am ineffective. So for the record, dear family, Bishop Callahan has asked me to resign as pastor as of this past Friday, two days ago, because I am divisive and ineffective,” he said.

Altman went on to state that he is contesting the request.

“In response, my canon lawyer asked for clarification, asked for the justification and a chance to review what was in my file that suggested I was so divisive and ineffective,” Altman said. “And I say all this only because I’m no expert on canon law. But understand only that while we are contesting the Bishop’s request – and we are – he could in theory appoint a parish administrator whilst I remain a pastor without duties until the appeal goes through Rome, which could take up to a year or more.”

Faithful Catholics have also shown their support for him, raising over $200,000 for his fight.

The statements that Altman is in hot water over include calling Joe Biden, “anything but a faithful Catholic,” stating that one “cannot be a Catholic and be a Democrat, period,” declaring Planned Parenthood as “the most racist organization on the face of this planet,” and calling the Black Lives Matter movement Marxist and communist.