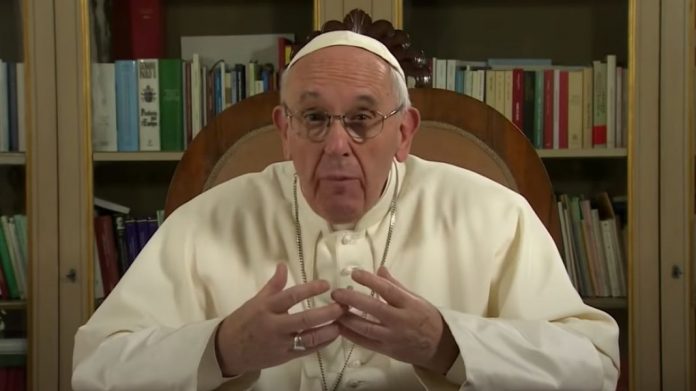 “Climate change” is one of the big issues that the Pope prattles on about.

Now Pope Francis made one disturbing statement about environmentalism that left jaws on the floor.

Pope Francis’ foundational belief in liberation theology – a mix of Catholicism with socialism – is rearing its ugly head again.

Leftists ignore when Pope Francis speaks against abortion in the harshest of terms, but perk up when he parrots an almost paganistic devotion to environmentalism.

The Pope sermonized again on the environment during a recent address.

He said, “All forms of life are interconnected, and our health depends on that of the ecosystems that God created and entrusted to us to care for . . . Abusing them, on the other hand, is a grave sin that damages us, and harms us, and makes us sick.”

It’s a “sin” to damage ecosystems, but solutions proposed by the environmentalists make zero sense.

For example, wind and solar power are inefficient energy sources that do harm to the environment.

Some bird species have become endangered by flying into wind turbines, and those same turbines take up a massive amount of land in order to generate useful energy.

Solar panels also take up a lot of real estate.

Inefficient land usage is not in accordance with being good stewards of the environment.

“We become predators, forgetting our vocation as custodians of life . . . Of course, we can and must work the earth so as to live and to develop. But work is not synonymous with exploitation, and it is always accompanied by care: ploughing and protecting, working and caring . . . This is our mission.”

However, bad environmental protection policies have done more harm than good in many instances.

For example, California is currently suffering from raging wildfires due to decades of mismanagement; environmental regulations restrict the practice of controlled burns, so dead forestry becomes a tinder box for towering infernos.

The pope also warned of rising sea levels due to melting glaciers.

The extent to which man-made activity has contributed to the melting of glaciers is impossible to know, but industrialization has undoubtedly been a boon for the world.

Developing nations have been able to lift themselves out of poverty by availing themselves of fossil fuels.

Radical environmentalists never consider tradeoffs because their only calculations are either pagan devotion to Mother Earth, or a pretext to take over the entire energy sector and thus control the economy.