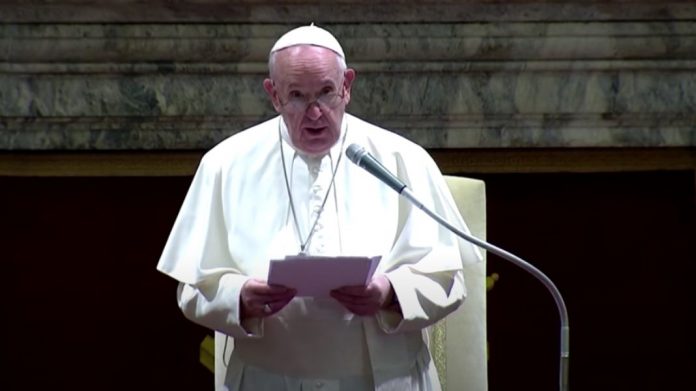 The Catholic church is falling apart.

Pope Francis is likely the most liberal pope the Catholic church has ever seen.

And President Biden and Nancy Pelosi are probably tickled pink over the Pope doubling down in this worship war.

Self-professed “Catholics” and abortion supporters Joe Biden and Nancy Pelosi still don’t darken the doors of their churches for any Mass very often.

So you can guess they’re probably just fine with liberal Pope Francis’ war on Latin Mass.

A little over thirteen years ago, Pope Benedict XVI gave permission to priests and groups of Catholics to have their Traditional Latin Mass back.

Along with the Mass, ancient prayers, liturgies for baptisms and confirmations and ordinations were brought back to the church.

Many Catholics say the result of this move was a growth of interest in the traditional rites and prayers of Catholicism.

The current pope, Pope Francis, has always treated the traditional Latin Mass with a bit of disdain, calling it “rigid.”

Francis has given numerous homilies denouncing the Latin Mass and its rigidity and says some in the church are obsessed with upholding tradition.

And now, Pope Francis is telling traditional Catholics “It’s this or nothing.”

Over the summer Pope Francis issued a document that reversed the implementation of the Latin Mass thirteen years ago and said the old rites were a source of division in the church.

Pope Francis, however, doesn’t seem near as worried about bishops performing same-sex marriages in Germany, which blatantly flies in the face of church teaching.

Despite his statement last summer, many bishops in the U.S. continued on with the Latin Mass declaring they were in no way divisive.

It seems the Pope doesn’t want the term Latin Mass used in churches and that even the times when Latin Mass is held are not to be printed in a parish schedule.

So, basically you can hold it but you can’t announce that you’re holding it.

It seems that Pope Francis also indicates that those who want to be part of the Latin Mass should not be accommodated at times when those who attend the “new” Mass are accommodated.

Of course the mere idea that the Pope can control what a Catholic church prints on its bulletin in the U.S. is absurd and might be something the church wants to investigate further.

That said, most know that Pope Francis is out to destroy the Catholic church and change it into another liberal institution that welcomes blatant sinful acts.

Pope Francis is stating that he doesn’t believe that the Latin Mass is the same as his “new” Mass and he’s right because the “new” Mass is just a coverup for radical liberal ideologies.