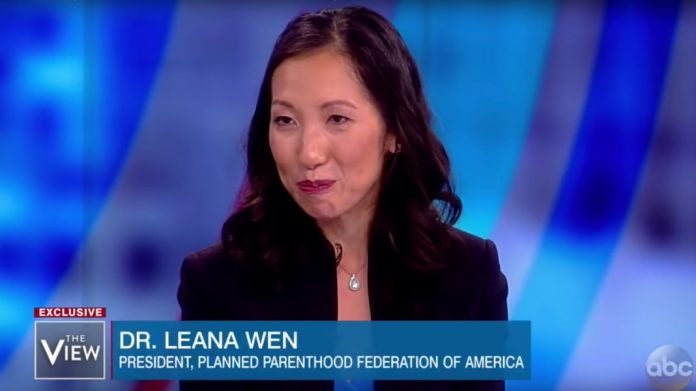 Planned Parenthood’s new president Leana Wen is their most radical president yet.

She is doubling down on disguising Planned Parenthood as “Women’s healthcare.”

But she just stepped in it with this outrageous claim.

She said she “wants to be clear” that all of Planned Parenthood’s services “from birth control to cancer screenings and abortion, are standard medical care.”

She, and Planned Parenthood as a whole, wants to hide abortion behind the guise of “women’s healthcare services” that are “critical.”

But Planned Parenthood doesn’t even provide mammograms, so their claim to be “women’s healthcare” doesn’t pass the most basic smell test.

To signify just how important this false illusion is to her, she has even pinned a tweet of her interview with CNN where she claims “reproductive healthcare” (she means abortion) is a human right.

The human rights she, and the Abortion Lobby at whole, fails to recognize are the ones that they violate when they abort little boys and girls by the hundreds of thousands.

They only want to defend the “rights” of the women who are keeping their bloody business going.

And they are even planning on keeping abortion around here in the U.S. even if it becomes illegal.

As we reported, Planned Parenthood released a plan called “Care For All” where they outline how they want to grow their business if abortion is outlawed.

The Abortion Lobby doesn’t care for anyone, and will do anything to keep their business going.

Which is exactly why we need pro-life legislators to stand up for what they say they believe in, and start by defunding Planned Parenthood.

Do you think Planned Parenthood is evil? Let us know what you think in the comments below.