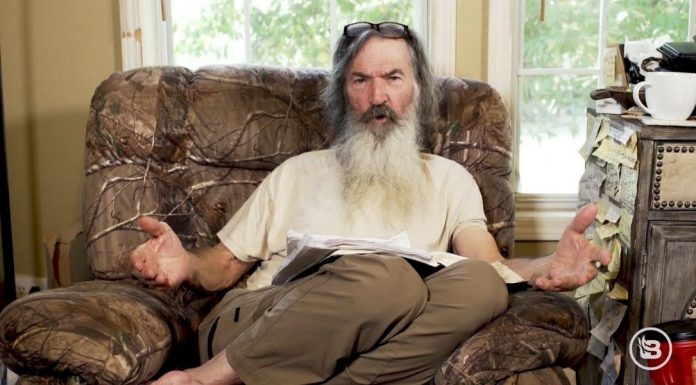 There is no doubt the government has been hiding things from the American people for decades.

Just in the last week alone, it was revealed that high-ranking officials knew far more about the origin of the coronavirus than they ever let on.

And according to Phil Robertson, the government is “concealing a lot from us,” and you won’t believe who he says is to blame.

Duck Dynasty patriarch, Phil Robertson, tells it like it is and does not shy away from his faith and distrust of the United States government.

In a recent episode of his wildly popular Internet show “In the Woods,” Robertson said that until we are willing to unmask what our leaders are doing, “they can – and will – slick us.”

As an avid duck hunter and someone who made his wealth off the duck hunting industry, the Duck Dynasty star compared the government fooling the American people just like he tries to fool a duck into thinking he has food.

“They try to conceal a lot of stuff from the people, and until you unmask it and look at it for what it is, they can slick you. In this case, we’re trying to slick the ducks, make them think there’s food here. That’s what the government says, ‘There’s food here. We’ll feed you. We’ll house you. We’ll educate you. We’ll give you your health care. It’s free for everybody.’ You look up one day, and we’re $20 trillion in the hole. And you say, ‘Where’d the money go?’ Well … they slicked us, just like we’re fixing to slick these ducks. We’re doing the same thing the government does,” Robertson stated.

He went on to say that the people are the problem.

And the man has a point.

America is at a crossroads with the indoctrination of its youth and the left-wing push for normalizing things like transgender surgeries and the teaching of Critical Race Theory in schools.

Robertson concluded by saying that “when the people’s hearts change, then and only then, will you see the politicians – which is a reflection of the people – we’ll see them change.”

It’s time for the American people to wake up and realize they’re being pushed around, and their freedoms are being trampled.