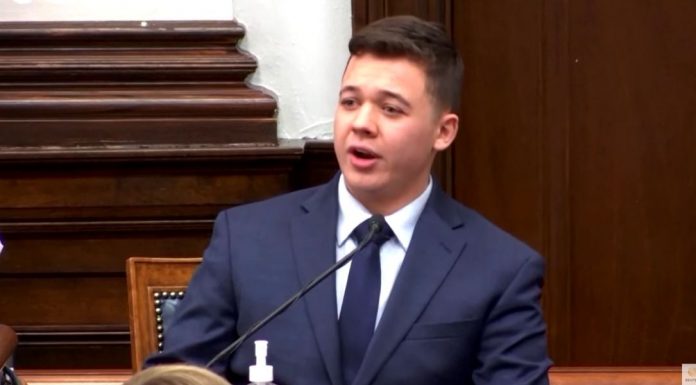 Leftists everywhere are still crying over the acquittal of Kyle Rittenhouse.

They continue to try and paint him as a heinous killer who was out to take down black people.

And parents can’t believe what this middle school did following Kyle Rittenhouse’s not guilty verdict.

After justice was served in the Kyle Rittenhouse case and he was found not guilty on the grounds that he was clearly defending himself in the face of danger, leftists began melting down.

Companies like Best Buy and Levi’s offered counseling to their employees that were “distraught” over the verdict and even Joe Biden spoke out against the wrongly accused Rittenhouse.

And it looks like the insanity hasn’t stopped for many “triggered” leftists.

In fact, one Massachusetts middle school decided to set up “safe spaces” for students upset over the Rittenhouse verdict.

It gets worse though.

These “safe spaces” are racially segregated because obviously that makes things even better.

Principal Chassity Coston of Bigelow Middle School in Newton, Massachusetts sent around a letter that advertised a period of time during the school day on December 2 for students to visit various “safe spaces” where they could “process and express their feelings” in both the Rittenhouse and Ahmaud Arbery cases.

Coston encouraged parents to discuss with their children, again middle schoolers, what “safe space” they might want to be a part of instead of the class they’re supposed to be in.

There were three areas that students could go to the library for “Reactions to Verdicts: Hearing and learning from peers,” the gym for “Rumor Control Room: Facts presented in cases, today’s laws, and final verdicts,” and the auditorium for “Questions & Discussion for Students of Color.”

Once again the Left segregates people based on the color of their skin.

Wasn’t this battle already fought many, many years ago? Didn’t Americans decide that separating people based on skin color is a bad thing?

If you’re following these leftists, you’d think that this country never defeated segregation.

This is not about children’s safety or mental well-being, this is about once again dividing this country.