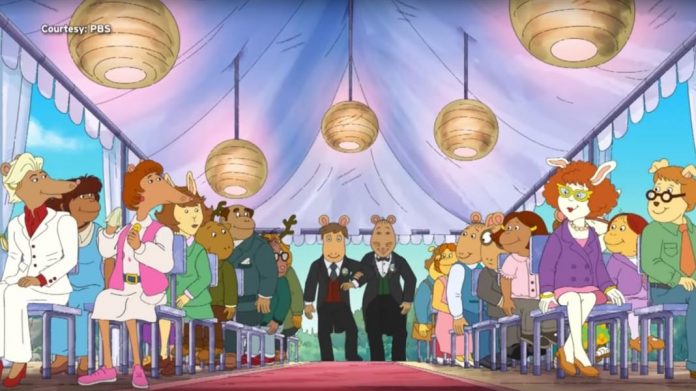 The new trend for long-running television shows is to prove how “woke” they are by forcing the radical LGBT agenda down viewers’ throats.

Parents are growing increasingly alarmed by content they used to think was “safe” for their children to watch.

And they’re furious after what one long-running children’s cartoon just did.

It’s a family-oriented show that promotes reading, friendships, and the importance of family.

But everything parents thought they knew about the show just radically changed forever.

In a recent episode, Arthur’s third-grade teacher married another male character and his third-grade class watched his same-sex marriage.

The season premiere of the children’s cartoon Arthur featured a same-sex wedding, surprising some young viewers about the sexuality of the protagonists’ primary school teacher Mr. Ratburn.

The episode, entitled “Mr. Ratburn and the Special Someone,” shows aardvark Arthur’s third-grade teacher Mr. Ratburn tying the knot another man. When Arthur and his friends find out their teacher is getting married, they assume that he is getting married to a female rat named Patty.

However, they eventually discover that Patty (voiced by Jane Lynch) is his sister and that his actual partner is a chocolatier named Patrick.

According to the fan page ArthurWiki, “Mr. Ratburn is primarily known for being a strict teacher, but he has many other hobbies outside of the classroom, including puppetry, playing in a rock band, and bird-watching. He is also seen as a role model by several students.”

Arthur has never been known to advance a left-wing agenda or force LGBT issues on children.

Little children are watching this show, and it is largely a positive influence on their social skills, relationships, and education.

But it’s clear that Arthur just caved to the radical LGBT agenda.

Children do not need to be exposed to same-sex marriage from a kids cartoon show.

The Left immediately applauded the show’s actions and called it a heroic decision to show a same-sex wedding in an episode.

But many parents are slowly learning about what happened and are up in arms.

What’s more concerning is what these TV shows could be teaching kids about without their parents realizing.

This could be a big mistake that finally takes Arthur off the air.