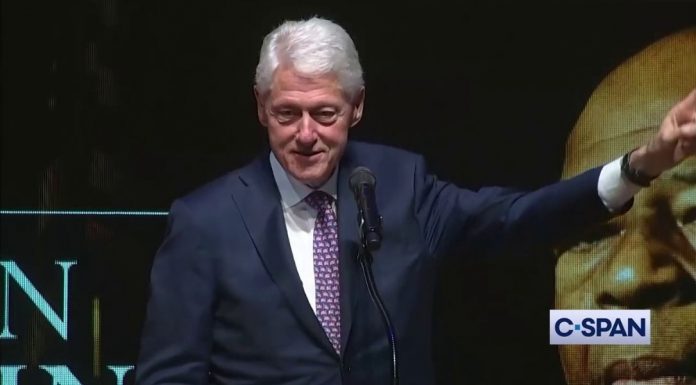 It seems as if former President Bill Clinton has been mainly staying out of the spotlight in recent months.

Given his rapid rise to stardom as President and the scandals that seem to follow both him and his wife, it makes sense that he’d be staying behind the curtain a bit.

But, only in 2021 could Bill Clinton get away with hosting this event.

Bill Clinton has faced decades of allegations of rape and sexual assault from many women.

It has also been uncovered that the former President was close associates with convicted pedophile and sex-trafficking billionaire Jeffrey Epstein.

Clinton has remained mum on the issue and refused to comment on the flights he took on Epstein’s private jet where reportedly young girls were offered to passengers for sex.

In January 2020, an article was published that showed a photo of Bill Clinton standing on Epstein’s infamous plane with a young girl, who, according to sources, was Epstein’s “sex slave.”

Even more, photos later surfaced that show Clinton, with some of Epstein’s known victims, including one picture of the former President receiving a back massage.

And now, just a little over a year after these things have become public, former President Bill Clinton is set to speak at an event on the topic of – wait for it – empowering women.

Only the Left could think this is a good idea.

The event is being put on by The Clinton Global Initiative (CGI). It will focus on the challenges women have had to endure during the COVID lockdowns and how to empower women throughout the world.

Along with Clinton current Vice President Kamala Harris will be speaking.

The event is being hosted by Harris’ alma mater, Howard University.

It should come as no surprise that allegations of sexual assault and rape are only troublesome to the Left when they are levied against conservatives.

The Democrats continue to ignore the obvious abuse of power and double standards on their side of the aisle.