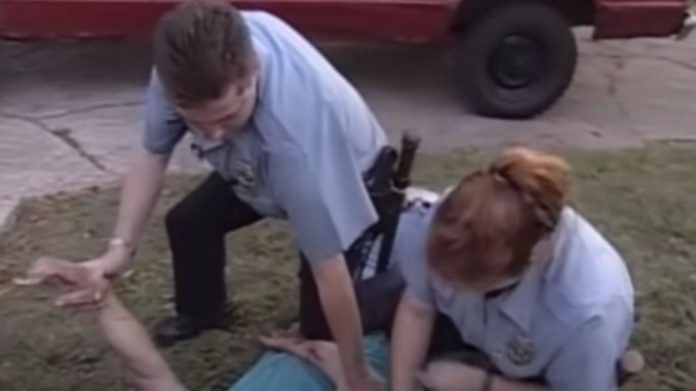 Leftists are feeling emboldened in their pursuit to erase anything they deem offensive.

Television shows, movies, pancake mixes, and even cartoons have felt the wrath of the deranged outraged Left.

But one TV show canceled by the “woke” outrage mob is making a comeback.

Ironically, the long-running television show Cops was canceled by the woke police.

After the death of George Floyd in Minneapolis, there was a strong push from the Left to remove police officers from the public consciousness entirely.

A writer from The Washington Post argued that all movies and shows portraying cops as anything but soulless monsters should be taken off the air.

There were even calls for the cartoon Paw Patrol to be put on the chopping block.

But Cops had been the biggest name to fall victim to the digital pitchforks.

Even the mere mention of the name conjures up the theme song Bad Boys.

The show had been on the air since 1989, but was pulled off the air immediately when the outrage mob came for them.

However, now that the dust has settled, Cops is starting up production again.

According to The Hollywood Reporter, production crews are filming in Spokane County, Washington.

The Spokane County Sheriff’s Office said in a press release:

“We have a longstanding relationship with Cops and [series producer] Langley Productions, and we are pleased they have decided to return, highlighting the outstanding work our deputies provide to all of you.”

So far, the new episodes will not air in the United States and are being filmed to satisfy obligations in foreign television markets.

But there’s still a chance that Cops could come back to the states.

A&E has already had discussions about reviving their lucrative Live PD franchise.

As the furor of Floyd’s gut-wrenching death subsides, cooler heads are likely to prevail.

Demonizing all police officers as bloodthirsty villains is absurd.

Law-abiding citizens who live in high-crime areas want more police presence in their neighborhoods, not less.

A Gallup poll shows that 81% of black people want the same amount or more cops in their community.

It’s only the only “woke” Left who believes crime will simply vanish if the cops go away.

And only the wokest of the woke believe that making cop television shows go away will make crime disappear.