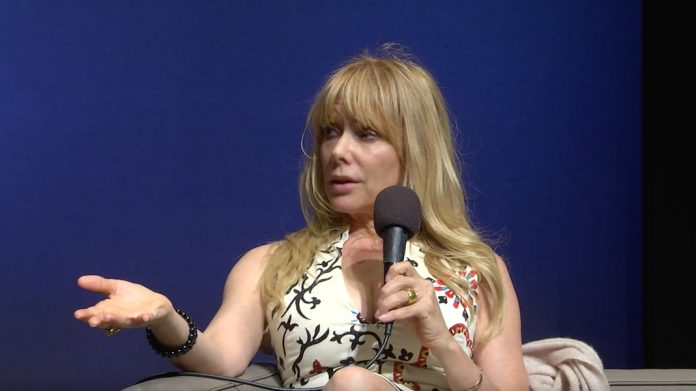 Hollywood is still suffering from an advanced case of Trump Derangement Syndrome.

They transferred their hatred of the Orange Man onto America itself.

And one Trump-deranged actress attacked America with one goofy protest.

Actress Rosanna Arquette has one of the worst cases of TDS in all of Hollywood, and that’s saying something.

She jumped on one progressive cause after another.

In one eye-rolling tweet, she even said that she was ashamed of being white.

Now Arquette swears that she will never stand for the American flag and The Star-Spangled Banner ever again.

Arquette’s tweet comes on the heels of Olympic hammer thrower Gwendolyn Berry actively denigrating the flag and the anthem after finishing third during Olympic trials.

The stadium was scheduled to play the anthem at 5:20 p.m., which occurred when Berry and the other competitors were on the podium.

Berry called the playing of the anthem when she was on the podium a “setup.”

It’s absurd that a U.S. Olympic athlete believes it’s an affront to stand for the anthem.

That should be a baseline requirement for competing in the Olympics, i.e. not showing utter contempt for the country.

This isn’t the first time Arquette has disrespected the flag.

The Left can barely contain their hatred for America, and that sentiment is seeping into the Democrat Party.

Former San Francisco 49ers quarterback Colin Kaepernick was turned into a folk hero by the Left for kneeling for the anthem and wanting the American system to be “dismantled.”

There’s no telling which anti-American cause the Left will jump aboard next.