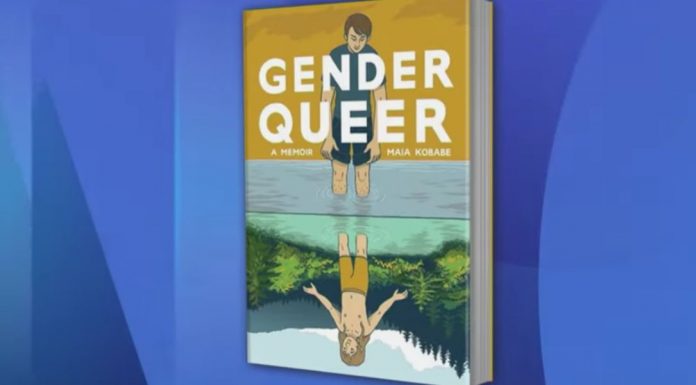 America’s public schools have become a battleground for the minds and souls of our children.

The number of teachers with a twisted sense of right and wrong is truly astonishing.

Now one red state is responding after one teacher revealed the Left’s jaw-dropping new tactic in their war on children’s innocence.

A new red state law is responding to how far unhinged leftist teachers will go to share pornography in the classroom.

A wholesome and healthy education has been pushed to the wayside in many classrooms in favor of pushing a political sexual identity confusion agenda—and it’s happening in even the most conservative of states.

Now a mother in Oklahoma is calling for her child’s former teacher to face criminal charges and the state’s education secretary wants to ban her from teaching in the state.

Laney Dickson says she did—and was immediately confronted with an invitation to join an “event” reading the book Gender Queer.

Dickson was holding the book when Fox 25 interviewed her, but she refused to read from it saying, “​​I’m not sure if I can even say these things on camera to be honest with you.”

That book, filled with pornographic content, is part of a body of “literature” gender confusion advocates have been pushing aggressively.

That type of content has caused Republican lawmakers to create laws dissuading teachers from essentially enticing students into inappropriate conversations about sexuality.

“If you were living alone down the street from me, and my kids went to your house, and they walked in there and you hand them this book, I bet the DA would press charges against you,” state Republican Senator Rob Standridge told a reporter with the local Fox station.

Meanwhile, the teacher has resigned from her job, but still claims she has “no regrets, would do it again, will do it again.”

“In response to unfounded calls from state leadership for widespread censorship, I did share a library-linked QR code with my students. Immediately after this, I was removed from my position and placed on leave,” Boismier told Fox 25. “Teachers across the district have been told by administration to either remove or restrict student access to classroom library texts for fear of a potential accreditation downgrade associated with any perceived violations of HB 1775.”

“Like many educators, the teacher has concerns regarding censorship and book removal by the Oklahoma state legislature. However, as educators it is our goal to teach students to think critically, not to tell them what to think. We addressed the issue and expected the teacher to return to class as normal Wednesday. At no point was the teacher ever terminated, suspended or placed on administrative leave but, unfortunately, we understand the teacher has publicly expressed their intent to resign,” the school explained in a written statement.

But Oklahoma’s Secretary of Education isn’t buying that nonsense.

“The best and brightest and good teachers do not want to indoctrinate kids; that goes against the very fabric of what it means to be a good teacher,” Education Secretary Ryan Walters said. “If that’s what a teacher is trying to do, they’re not a good teacher. In the state of Oklahoma, we want teachers that are there to empower students, not indoctrinate them or brainwash them.”

It’s becoming increasingly obvious that there’s a hostile takeover of America’s youth happening right now—and even the most conservative Republican administrations have their work cut out to even have a chance at turning the tide.