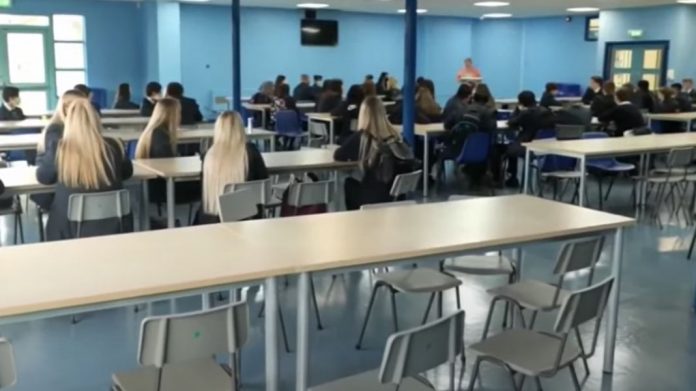 Education has become radical beyond belief.

Leftists are teaching students insane material, and not enough parents are aware.

And one state is indoctrinating students with something that left Christians speechless.

The Left has been attempting to secularize all of society for decades.

Christians have been put on the defensive. Democrats are chipping away at religious exemptions for commerce, medicine, and even adoption.

But the Left is simultaneously attempting to indoctrinate students with pagan religion.

California – where unhinged Democrats enjoy a super majority – is attempting to pass a new ethnic studies curriculum that is so radical, it shocks the conscience.

The architect of the ethnic studies program wants students to engage in chants to Aztec gods.

“This religious concept is fleshed out in the model curriculum’s official ‘ethnic studies community chant.’ The curriculum recommends that teachers lead their students in a series of indigenous songs, chants, and affirmations, including the ‘In Lak Ech Affirmation,’ which appeals directly to the Aztec gods. Students first clap and chant to the god Tezkatlipoka – whom the Aztecs traditionally worshipped with human sacrifice and cannibalism – asking him for the power to be ‘warriors’ for ‘social justice.’”

Needless to say, the curriculum was devised by a radical communist.

If the ethnic studies model passes, over 10,000 schools and 6 million students will be subject to this nonsense.

“The chants have a clear implication: the displacement of the Christian god, which is said to be an extension of white supremacist oppression, and the restoration of the indigenous gods to their rightful place in the social justice cosmology. It is, in a philosophical sense, a revenge of the gods.”

While Christians get demonized, Aztec gods are being propped up by educators in official capacities.

It’s almost too shocking to believe, but it’s true.

This is how the Left has taken over the culture. They’ve indoctrinated students with radical texts for decades while too many conservatives were asleep at the wheel.

Donald Trump woke a lot of people up by highlighting these culture war issues that Republicans of the past were afraid to broach.

Rufo helped bring the insidiousness of critical race theory to the fore by breaking it down on Fox News with Tucker Carlson.

Millions of people were hearing about this neo-Marxist philosophy that had been incubating in the universities for decades.

Leftists are now attempting to accelerate the trickle-down effect into K-12.

If California falls, it’s only a matter of time before other blue states follow suit.

Radical ballot initiatives, including one that would’ve allowed the state to discriminate based on race, were struck down in California, so some remaining sensible liberals are waking up.