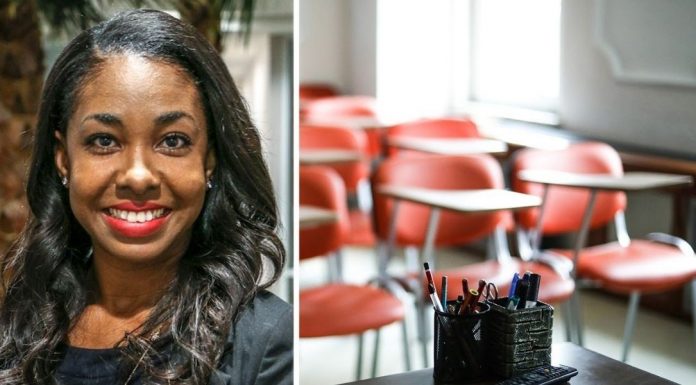 Parents across the nation are finally standing up for their children’s education.

And many school boards are reluctantly caving into parent’s pressure to open up schools.

But one school board member thinks it is “white supremacy” to get your kids back into schools.

It’s been nearly a year since kids haven’t been in a classroom for many parts of the nation.

And kids are struggling as a result.

Countless school districts are seeing their fail rate go up like never before.

Oftentimes parents are stuck at home trying to help their kids manage through it only to discover just how far behind they are.

But finally, parents are standing up to the teachers unions and school boards who have refused to open up schools.

And it looks like parents’ pressure is finally working with many school boards who were once more worried about teacher unions than a child’s education.

Even the Biden presidency has hinted at reopening schools after numerous polls show mounting political pressure over the issue.

But some aren’t even entertaining parent’s concerns like this school board member from California.

Chardá Bell-Fontenot, Vice President of the La Mesa-Spring Valley Board of Education, went on an all out assault on the idea of her school administration opening up schools.

She even went as far as to say it is like modern day slavery.

Her comments started a sparring match with her fellow board members who were concerned about her conduct on the board after they discussed a survey that found that 70% of parents in their school division wanted schools to reopen.

The irate Bell-Fontenot continued without hesitation “Who are the 70 to 80 percent, and where are they? I would like to know geographically from which school sites, which language groups, and how they conducted this feedback. Where? Please give it to me before I can make a decision. I can’t make one. I cannot make one. And I will not make one.”

And during her rant she claimed that no one knew about the issue.

This even caused the Superintendent to go at her by saying “I take great offense to the statement that no one on here knows what they’re talking about right now. I don’t believe that to be the case at all.”

And continuing with her theme of playing the victim to racism, Bell-Fontenot responded by claiming he was being racist to her for calling her out.

You can see the exchange below:

La Mesa-Spring Valley School Board member compares reopening schools to slavery and "very white supremacist ideology", said board VP Chardá Bell-Fontenot, another members mentions that '70 to 80 %' of families and students want to return to school. (1/2) pic.twitter.com/XNGcvxAIoW

The sad thing is many school boards across the nation have members like Bell-Fontenot who would prefer teaching Black Lives Matter curriculum in classrooms rather than hearing parents’ concerns about getting kids into the classroom.

Hopefully more parents stand up and actually pay attention to what is happening in their schools.