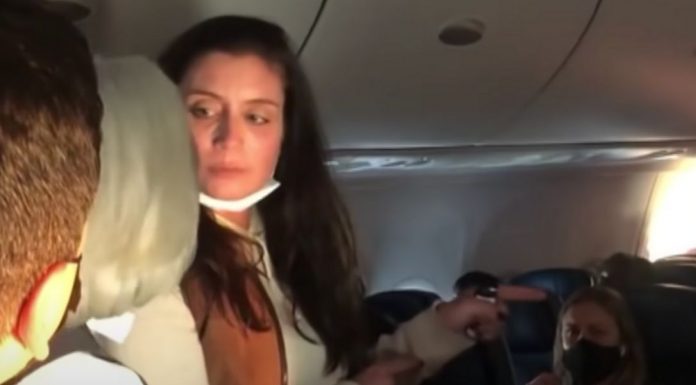 Sometimes you just need to piss off a Karen to make a better day for yourself.

And this story is so good that it will instantly trigger all the Karens and woke leftists that hear about it.

Because one man just became a legend on a plane after he did this act that triggered countless leftists and Karens.

If you are having a bad day and you run into a Karen you have two choices.

One, you can let the raging Karen or deranged leftist just suck all the remaining joy you have out of you.

Or, your second option, is to troll the living hell out of them.

Nothing drives them more insane than when you just troll their stupid rules and show them just how idiotic they really are.

Well one American hero just showed us all how it is done.

We have all lived through the idiocy of all of these COVID rules.

But of all the idiotic rules, airlines have the dumbest ones of all.

For one, they make you wear your mask all the time unless you are eating or drinking.

But one stud beat the system.

During a recent flight, a man decided to eat a single french fry for literally an hour and a half.

This guy reportedly kept a french fry in his mouth for the entire 1.5 hr flight so he wouldn’t have to wear a mask 😂😂 LEGEND 👑 pic.twitter.com/TKk51tWU5E

Now that takes a level of commitment that many of us don’t have.

But its worth it.

This American hero showed us all just how dumb these rules are.

And the best part about this video is you know a Karen somewhere is losing their minds after watching it.

Who can forget the Baywatch nut job who came unglued a few weeks back.

A maskless Karen who went ballistic on, and assaulted, a fellow Delta Airlines’ passenger because he wasn’t wearing a mask while eating was arrested and turned over to the FBI. pic.twitter.com/bKJ9mc3CKi

If you aren’t defying their rules then beat them at their own game and mock them.

The Left can’t stand it when you mock them so we need more people like this guy.