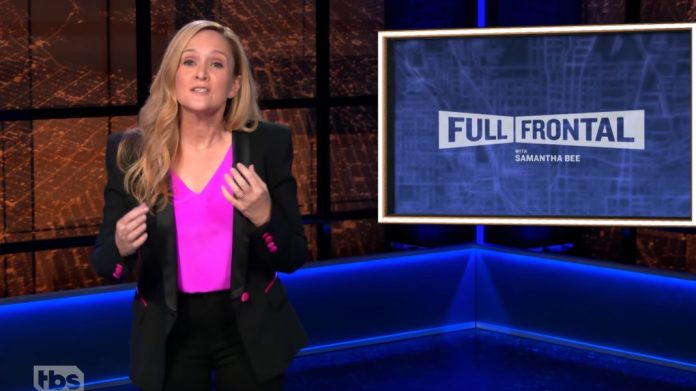 Late night comedians have abandoned trying to be funny.

Instead they regurgitate the talking points of the Democrat Party.

And one late night comedian failed miserably in an embarrassing attack on this Republican.

They’ve run several hit pieces against him, including a deceptively edited 60 Minutes segment, because they see him as a serious contender in 2024.

If Donald Trump does not run again, DeSantis has a strong path to victory, and the Democrats know it.

Bee worked in all of the usual slanders against Republicans in a painfully unfunny five-minute diatribe.

Some commentators were quick to point out how Bee’s husband opposed an integration initiative by progressives that would’ve involved their child’s tiny private school.

Speaking of racist, remember when Sam Bee and her husband advocated against school integration for poor black kids because they might attend their own kids school? Please go on.. https://t.co/VI5Sd0QSmF

DeSantis recently came in first on favorability in an informal straw poll among 2024 Republican hopefuls, and the Democrats are already framing him as “more dangerous than Trump.”

Democrats have been employing this tactic for decades.

They slander the Republican President as a Nazi, then rebrand him as a moderate in order to attack the next Republican candidate.

Democrats relentlessly compared George W. Bush to Hitler, but now he’s the “compassionate conservative” who’s passing a piece of candy to Michelle Obama because isn’t that so cute?

Bee has started the narrative that DeSantis is worse than Trump because he has the same politics, but he’s savvier.

If Trump chooses not to run in 2024, expect this rhetoric to pick up steam.

The next Republican has to be worse than the previous one for the Democrat Media Complex to exist.

Despite the slander, people are flocking to Florida, and the state went solidly red for Trump in 2020.