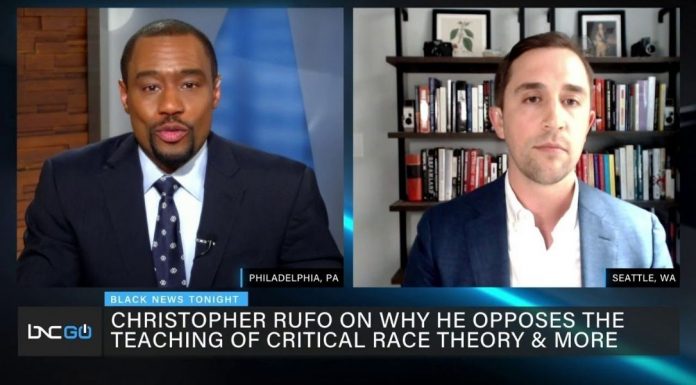 Now one far-left host debated this racist policy and asked a jaw-dropping question.

Donald Trump exposed the Marxist ideology of Critical Race Theory, and awakened millions of Americans to the true threat of it.

Trump first learned about CRT by watching a Fox News broadcast, and the person discussing the topic was journalist and documentary filmmaker Christopher Rufo.

Rufo, a former liberal who now writes for the Manhattan Institute, has become arguably the staunchest opponent of CRT and its sister ideologies.

Rufo appeared on leftist professor Marc Lamont Hill’s new political show to discuss CRT, and he was beset by ridiculous questions from Hill.

A low point in the interview came near the end when Hill asked Rufo a trap question: “What do you like about being white?”

“What do you like about being White?” I asked this question to anti- Critical Race Theory advocate Christopher Rufo. He stated that Whiteness was always only painted as negative, so I asked him to offer something different. Peep his response: pic.twitter.com/H5IkAyv2Co

The Left has anchored itself to race essentialism, something the country fought against for decades.

But CRT is an inherently racist philosophy, so leftists can’t help themselves.

They believe that actively discriminating on the basis of race will somehow bring about racial healing and equity.

It’s absurd on its face.

Racism is not a cure for past racism.

However, this is the ideology that the Left is attempting to spread far and wide, and they’re using deceptive tricks to do so.

For example, they’re hiding the true roots of CRT – which are undeniably Marxist – and trying to soft-pedal it as simply discussing the history and impact of racism.

CRT is a Trojan horse for redistributive policies, i.e. the Left’s panacea for everything.

Rufo has done great work in exposing the dangers of CRT around the country, and hopefully his conversation with Hill will spread his work further and wider.