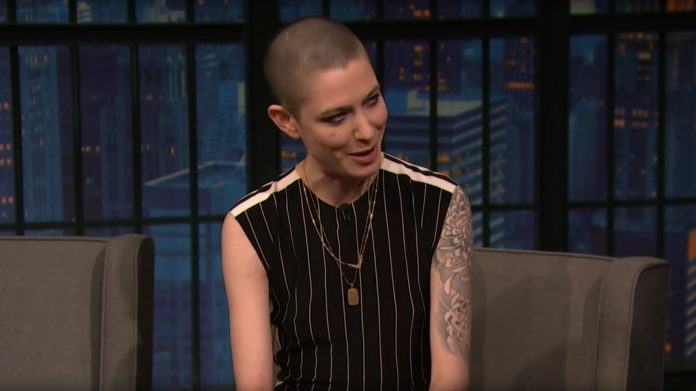 Hollywood is completely off the rails.

The film industry has been extremely liberal for decades, but the election of Donald Trump accelerated Hollywood’s descent into madness.

Now one far-Left actress is calling for award shows to become even more radicalized.

Ratings for Hollywood awards shows have been on a steady decline.

Audiences are tired of sanctimonious celebrities patting themselves on the back while they lecture the rest of America on how they should live their lives.

The most recent Oscars and Emmys were particularly embarrassing because both shows carried on without a host, as gay activists bullied the scheduled host and comedian Kevin Hart for jokes he tweeted years ago and already apologized for.

So Hart backed out of hosting the Oscars, which had been a life-long dream of his.

No other comedian dared to subject themselves to the scrutiny, so the show did not have a host.

Same for the Emmys.

And now Leftists want to push even further.

The gender non-conforming Dillon is calling on the Television Academy to drop gendered acting categories from the Emmys, telling [The New York Times] in an interview, “I presume no one has asked them directly to make that change, so perhaps this is the right moment… What are the first steps that need to be taken to make that change? Call me. Email me. Let’s get it done.”

A spokesman for the Television Academy told the Times that while the organization “celebrates inclusiveness,” it has no plans to make that change.
[…] Dillon plays the gender non-binary character Taylor Mason in Showtime’s Billions, and chose to be submitted for Emmy consideration in the supporting actor category two years ago. Dillon, who has so far failed to earn an Emmy nomination, was born female and but now identifies as non-binary and uses the pronoun “they.”

The great irony of the transgender and “non-binary” movement is that it squarely contradicts the feminist movement.

If the Oscars and Emmys catered to Dillon’s wishes, it would only serve to limit the number of women being recognized for leading and supporting roles.

Leftism is a destructive force, and inevitably it will always eat itself.

Do you think eliminating gender categories for awards shows is a good idea?