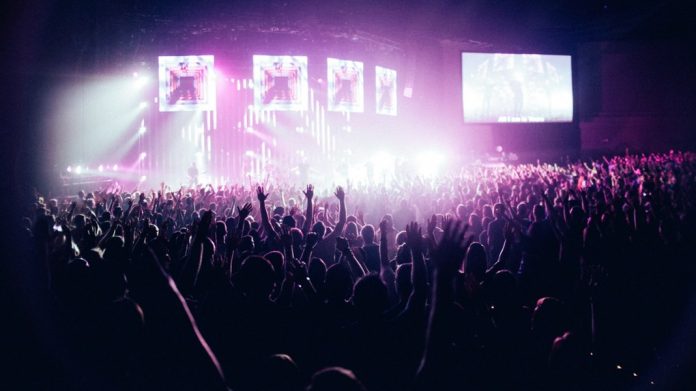 Most in the music industry are buddies to the political leftists in charge.

They will do anything to make sure politicians like Nancy Pelosi and Joe Biden keep their power.

But one famous American rock star went off on leftists and his audience was in utter shock.

The music industry was one of the first American institutions to fall to the Left.

Ever since the Vietnam War, popstars have lined up to follow the Left’s marching orders.

And it has continued on to this day.

I spoke to @vmagazine about why I’ll be voting for Joe Biden for president. So apt that it’s come out on the night of the VP debate. Gonna be watching and supporting @KamalaHarris by yelling at the tv a lot. And I also have custom cookies 🍪💪😘

Good morning PENNSYLVANIA! I’m so excited to see you today and SING for you!!!!!!! I believe in 🎶 YOU & I 🎶 !! Let’s talk about what America looks like with a KINDER President. WE NEED EVERY VOTE❤️ I’m with @JoeBiden —Lets go 24 hrs!!!!!! #Biden #AmericaNeedsPennsylvania pic.twitter.com/z0PaEZR5aF

This is the most important election of our lifetime, and standing on the sideline is not an option. We endorse @JoeBiden. So please, go vote. Lives depend on it. pic.twitter.com/uxxAuWOfKo

And those musicians who speak out in support of the American people have been few and far between.

But late last week, Dave Mustaine, the frontman for heavy metal band Megadeth, shocked his fans when he spoke out against the tyranny we are all witnessing today over COVID.

Mustaine told the crowd at Camden, New Jersey, “We’re all here together. We’re not in f***ing bags. We’re not freaking out, and we’re not yelling at people, ‘Wear your f***ing mask’.”

He continued, “Listen, it starts with this kind of a sensation that we build right now. We feel together, we feel strength in numbers. We feel like we are invincible. People will not be able to stop us.”

Mustaine then ended his speech to the crowd by saying, “Right now, what’s going on is tyranny. This is called tyranny. Look it up when you get home. And tyranny isn’t only in government. Tyranny right now is in the schools and tyranny is in the medical business. We have the power, especially us heavy metal fans, we have the power to change things.”