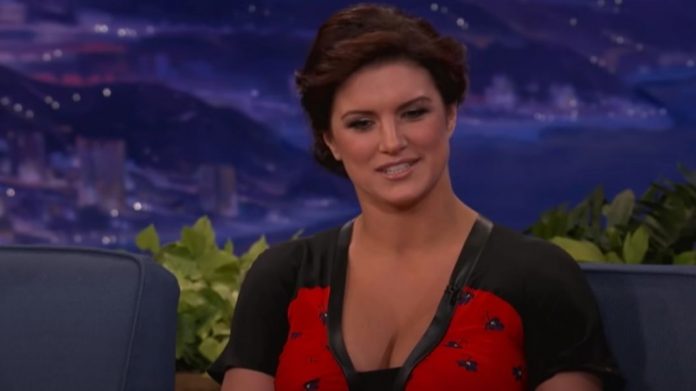 Anyone in the industry who speaks out against Left-orthodoxy puts his or her career in jeopardy.

But one actress shockingly stood up to the left-wing outrage mob with this act.

If there’s anyone in Hollywood equipped to take on the “woke” Twitter mob, it’s Gina Carano.

The MMA fighter-turned-actress has stepped into the octagon against women trying to take her head off, so Twitter trolls turned out to be an appetizer.

Triggered leftists tried to get #ginacaranoisoverparty trending on Twitter because she refused to bend the knee to far-left activists.

Her first “crime” was not tweeting in support of Black Lives Matter, an openly Marxist organization, then she tweeted support for small business owners who were hit hard during the out-of-control George Floyd protests.

Carano then tweeted a famous photo of a German in 1930s who refused to stand and give the Nazi salute, a clear sign that Carano would not cater to the “woke” mob.

Ironically, Carano was called a “racist” for tweeting the photo.

Another Twitter pest condescended to Carano and told her the critics were trying to educate her, but she wasn’t having any of it:

The Left has become so unhinged, simply not showing enough deference to Black Lives Matter is equivalent to racism.

This insanity has taken over the Left.

It’s time for more celebrities like Carano to take a stand against the excesses of the Left.

Otherwise, the outrage mob will win.

Culture Watch News will keep you up-to-date on any developments to this story.