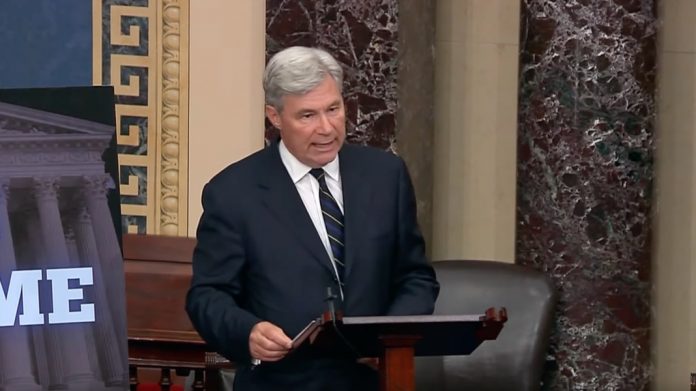 Leftists are some of the most hypocritical people in our nation.

They stand tall claiming they are better than everyone else as they do exactly what they accuse others of doing.

And one Democrat Senator who claims to be a champion for Black Lives Matter got caught being part of an all-white social club.

Leftists by their own nature are hypocrites.

They scream at conservatives for being racist but they insist that inner city residents just don’t understand how to obtain a source of identification to vote.

Leftists hurl insults at Republicans, claiming they hate minority children, all while they cheer on Planned Parenthood which predominantly exists to butcher minority babies in the womb.

And they foam at the mouth about what they call “racist” laws that they implemented just decades ago.

You just can’t make this stuff up.

But in another spat of leftist Democrat hypocrisy, Senator Sheldon Whitehouse was confronted about being a member of an all-white beach club.

Most people know of Senator Whitehouse from his recent stint of being the Democrat’s court jester during Justice Amy Barrett’s confirmation hearings.

Well, earlier this week a reporter asked about the all-white beach club his family is a part of.

He responded, “I think the people who are running the place are still working on [diversifying membership] and I’m sorry it hasn’t happened yet.”

Then the reporter dumbfounded by his response asked, “[y]our thoughts on an elite, all-white, wealthy club, again, in this day and age – should these clubs continue to exist?”

He knew he was caught for being a hypocrite so he claimed, “It’s a long tradition in Rhode Island and there are many of them and I think we just need to work our way through the issues, thank you.”

You can see his hypocrisy caught on camera in the exchange below:

This is the same man who claimed last year that “[o]ur country is at a crossroads. A nation reeling from a pandemic and an economic catastrophe that have disproportionately affected communities of color is mourning the tragic deaths of George Floyd, Breonna Taylor, Ahmaud Arbery, and so many others. All the while, President Trump is toiling to deepen the fault lines in American life.”

Just another hypocritical Democrat with their own set of standards that doesn’t apply to themselves.

But this will continue as long as idiots vote for Democrats.