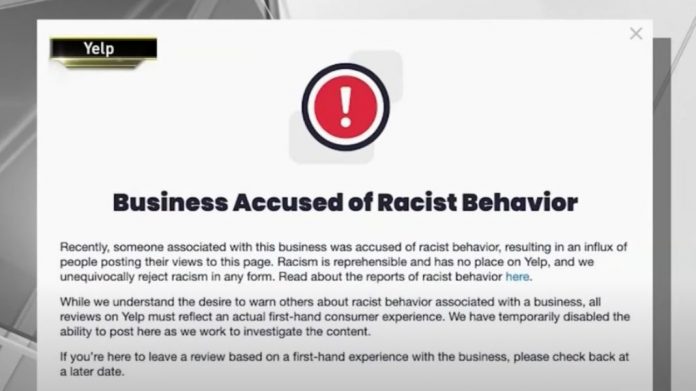 The Left isn’t going to stop until “wokeness” invades all aspects of life.

Virtually all of America’s cultural institutions have been shot through with leftism.

Now one company just made a terrifying new “woke” policy that left jaws on the floor.

Black Mirror, the dystopian anthology series about the pitfalls of technology, becomes more like a documentary with each passing day.

The company announced that it will put an alert on businesses accused of racism.

“As the nation reckons with issues of systemic racism, we’ve seen in the last few months that there is a clear need to warn consumers about businesses associated with egregious, racially-charged actions to help people make more informed spending decisions.”

The dangers of such a move are already clear.

There’s already a mechanism on Yelp to deal with racist incidents at a business; it’s called writing a review.

That’s the whole point of the platform.

But putting some separate alert feature now functions as a scarlet letter that could ruin a business based on questionable information.

Malik said that the alerts might link to a news story about the business, but this is how political activists on the Left launder ideas.

Some far-left blog could write a hit piece on a business because they don’t openly support the Black Lives Matter organization, then that article could serve as the basis for putting a “Business Accused of Racist Behavior Alert” stain on the establishment.

This is what the Left does with attack dog sites like Media Matters, so this is the obvious next step.

Radical leftists will undoubtedly use this feature as a way to shake down businesses.

Something similar has already happened.

In Louisville, Kentucky, Black Lives Matter activists tried to shake down local businesses as a form of a protection racket, and a community of Cuban refugee business owners stood up to the mob.

Yelp already added a “black-owned business” alert in response to the death of George Floyd, so it’s clear that the company is committed to going woke.

Once a company goes down that path, there’s no telling how far it will go.

For example, far-left employees at Pinterest were labeling pro-life posts as pornography in the back-end coding to stop them from spreading.

There’s no question the Left will abuse this concerning Yelp policy.