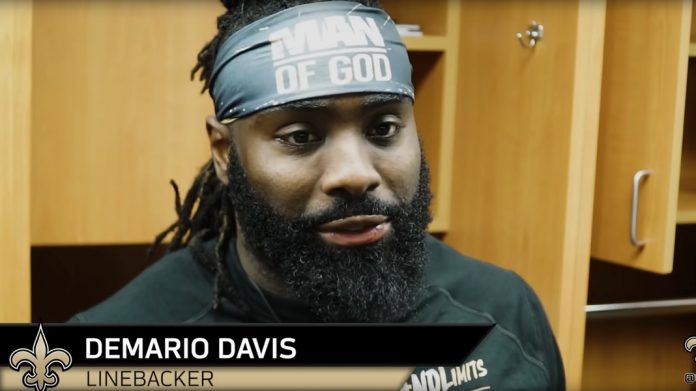 Tim Tebow was constantly mocked for his openness about his Christian faith.

Now a Christian NFL player received a fine for one shocking reason.

He wore a headband to express his faith in God, but the NFL was none too pleased with his gesture.

The NFL levied a $7,000 fine for violating their “personal message” policy.

New Orleans Saints star Demario Davis has been fined more than $7,000 by the NFL after he wore a ‘Man of God’ headband.

Davis sported the headband under his helmet during the Saints’ Week 3 game against the Seattle Seahawks on September 22.

A few days later he shared a photo of the headband on Instagram with the caption:

“So, I got fined $7K for my headband. Should I continue to wear it, or nah? #LetThePeopleDecide #ManOfThePeople #ManOfGod.”

The linebacker was slapped with the fine because the head gear violates the NFL’s “personal message” on uniforms rule.

If he wears it again, the second offense would cost him $14,037, according to the NFL.

The NFL has clearly lost its way.

Davis isn’t even the only Christian New Orleans Saints player to come under scrutiny for his faith.

Future Hall of Fame quarterback Drew Brees was attacked for appearing in an ad by a Christian group that was promoting a campaign for kids to take their Bibles to school.

Brees was hectored by Left-wing media outlets and LGBT activists to address his appearance in the ad.

Leftism has seeped into so many aspects of American culture, and Christianity is one of its main targets.

Should Davis have been fined for wearing the headband?