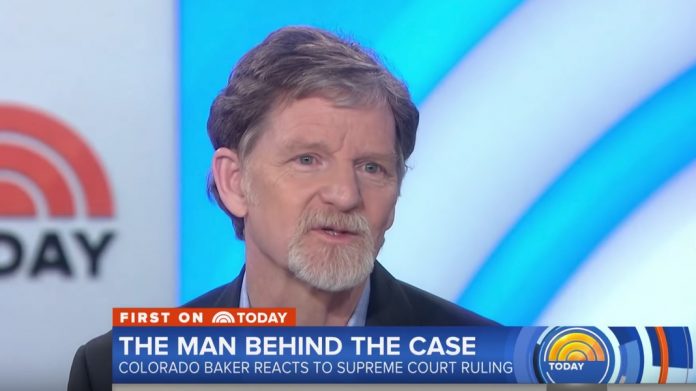 Religious freedom is under constant assault in America.

Many leftists are determined to quash every trace of Christianity in the country.

And one Christian baker is being harassed again for an unbelievable reason.

Jack Phillips, owner of the Masterpiece Cakeshop in Colorado, is being harassed yet again by radical leftists.

Phillips was sued for refusing to make a custom cake for a gay wedding based on his Christian values.

Instead of finding another cake shop, litigious activists went after Phillips’ business.

After a seven-year legal battle that went all the way to the Supreme Court, Phillips won by a ruling of 7-2.

Even though the Supreme Court ruled in Phillips’s favor, the case was decided on narrower grounds – the court decided that the Colorado Civil Rights Division improperly targeted Phillips.

That left the door open lawsuits that were better crafted.

A transgender activist also sued Phillips on familiar grounds that he would not bake a gender transition cake, but he was represented by the Alliance Defending Freedom (ADF), a religious liberty group, and they got the case dismissed.

However, that same transgender activist is coming after Phillips yet again, only this time in a different Colorado court.

The ADF said in a statement, “For some, it will never be enough to politely agree to disagree about important issues like the meaning of marriage or whether to celebrate a gender transition.”

This sums up the Left in a nutshell.

At its core, leftism is an expansionist ideology that does not allow for pluralism.

If you are not totally on board their agenda in every aspect, they will come for you.

Many celebrities have found this out the hard way in recent memory.

Phillips has suffered immensely, losing 40% of his business after the initial lawsuit.

He’s also been mocked and ridiculed by celebrities, including actor Andrew Garfield at the Tony Awards.

This shameful ordeal has reached the point where Phillips may need to counter-sue for harassment.

He’s clearly being targeted by activists who have no other intention but destroying his business to make a legal point.

This brazen move is just another example of Christianity being under assault.

Meanwhile, the same leftist activists are probably the ones who think a young girl wearing a hijab is empowering.

Will radical leftists ever stop trying to destroy Phillips’s business?