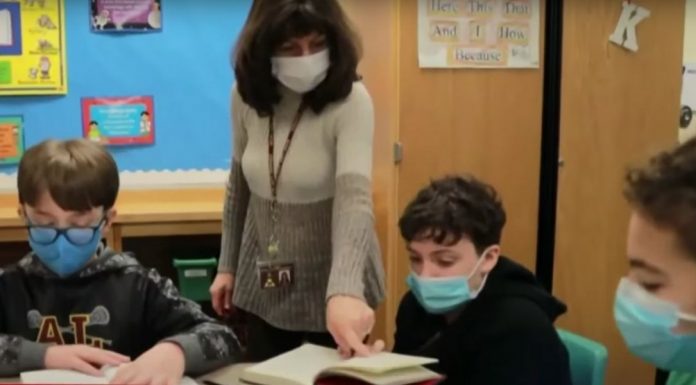 New York state has been solidly blue for nearly a century.

But leftists who shut down the nation’s biggest city during the pandemic now have a huge problem on their hands.

And the “Angry COVID Moms” refuse to go away.

Angry parents turned Virginia red last fall — and now it looks like the mom lobby is shaking things up in even the bluest of cities.

Parents certainly have good reasons for their fury.

Reports show that babies born during the pandemic are averaging a score of 78 on IQ tests — rather than the pre-pandemic average of 100.

There has also been an astonishing 364% surge in toddler speech therapy referrals.

Those dismal statistics can be attributed to the maniacal use of masks in blue cities during the pandemic as children who depend on imitating the lip movement of adults to learn how to speak have been cut off from almost all opportunities to see adults forming words.

A more concerning long-term consequence may have to do with the emotional intelligence children typically develop from seeing how adults handle life through facial expressions.

Older children have been suffering during the pandemic in equally life damaging ways as pandemic paranoia has taken control of their childhoods and caused a sudden spike in the number of young people harming themselves.

Nobody understands that toll insane pandemic lockdowns have taken better than moms — and now they have an organized political movement causing no end of headaches for establishment leftists.

“When you shut down my kids’ schools and impose devastating mental-health effects on them — I don’t forgive anyone who did that,” Congressional candidate Maud Maron told the New York Post. “This is the year that parents say, ‘You’re either with us or against us.’”

Maron and others in the Angry COVID Moms coalition are fed up with politicians who messed up their children’s lives over the past two years — including New York Governor Kathy Hochul.

“When Kathy Hochul gets on the screen, talking about how she wants to protect us and keep the masks in schools,” Maron said.

“She doesn’t have a f***ing mask on her face, and I’m so sick of politicians who take the mask off their face to tell me to put the mask on my children — like how dare you?”

But belated and reluctant efforts to “give” citizens their freedom back aren’t flying.

Another NYC mom, Natalya Murakhver, filed a lawsuit against NYC to force it to reopen.

“They were completely disinterested in responding to our calls,” she said.

Now, elected officials are starting to realize these angry moms are a powerful new lobby.

But that doesn’t mean the moms are ready to give in — and that sentiment is shared by moms all over the nation.

According to one mom from Massachusetts, it’s past time to hold government officials and others in power accountable for their actions.

“The people who were supposed to be protecting our kids… they all abandoned their responsibility,” Emily Burns said.

By choosing to abandon logic in favor of playing partisan politics, elected officials in formerly “safe” districts are now locked in a battle to save their careers.

Now that moms have had their eyes opened to what leftist politicians were willing to do to their children, it seems likely politics will never be the same again.