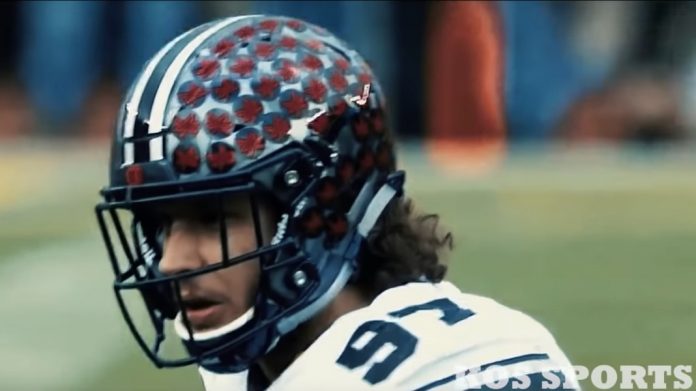 The NFL has suffered big time in the last couple of years.

Their support for National Anthem-kneelers has upset many Americans, including President Donald Trump.

Now, NFL top prospect Nick Bosa deleted a series of tweets about the President and the reason why has Trump supporters fuming.

The Ohio State defensive end is projected to go in the first handful of picks in the upcoming NFL draft.

And because of the political stances by some teams and players in the NFL, Bosa felt the need to scrub his Twitter account clean.

During his career at Ohio State, Bosa called Colin Kaepernick a “clown” in a now-deleted tweet and even tweeted out a picture of Donald Trump and Ronald Reagan with the caption “Goats.”

“Goat” is the acronym for “Greatest of All Time.”

But Bosa had no choice but to delete his pro-Trump tweets.

“I had to, Bosa said.” “There’s a chance I might end up in San Francisco.”

His reference to San Francisco has everything to do with it being Colin Kaepernick’s last team he played for where he made kneeling during the National Anthem a national issue.

Bosa could easily be the number one draft pick.

But if he doesn’t go first, San Francisco owns the number two overall pick, and everything seems to indicate the 49ers have heavy interest in a pass rusher.

Everyone knows it’s also one of the most left-wing cities in the county.

The issue of kneeling during the National Anthem divided the country.

And we don’t blame the young 21-year-old for distancing himself from politics on Twitter.

After all, in today’s current political climate, you can disrespect the flag in the NFL, but as Nick Bosa shows, you can’t support a Republican president without fear of the leftist Twitter mob.

Even New England Patriots QB Tom Brady has had to shy away from his support for the 45th President because of the immense hatred the progressive Left throws at you.

No doubt the fact that a Trump-loving superstar could end up in San Francisco while Colin Kaepernick has yet to return to the NFL because no team will take him will surely upset many on the Left.

Should Nick Bosa be forced to hide his support of Donald Trump, while many other NFL players are free to bash America without any repercussions?