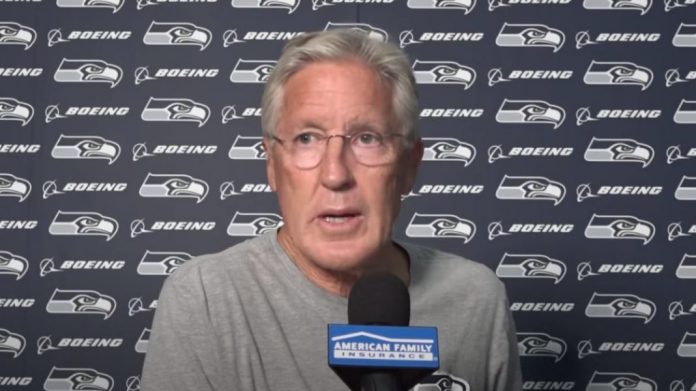 The NFL might’ve crossed the point of no return when it comes to “wokeness.”

The league has allowed activists to run the show, and it’s only going to get worse.

Now one head coach just went on an insane anti-America rant that will make your head spin.

During a conference call with reporters, Carroll said:

As we’re speaking about all that’s going on, and this is about racism in America, white people don’t know. They don’t know enough. And they need to be coached up and they need to be educated about what the heck is going on in the world. Black people can’t scream anymore, they can’t march anymore, they can’t bear their souls anymore to what they’ve lived with for hundreds of years because white guys came over from Europe and started a new country…

This rhetoric from Carroll is straight out of critical race theory 101.

Critical theory posits that any disparities between groups is due to discrimination.

Due to the horrors of slavery and Jim Crow, critical race theory has been given a certain degree of legitimacy by the media, but the grievances have spiraled completely out of control.

This has serious consequences for America because critical theory is simply a Trojan Horse for Marxism.

All devotees of critical theory are invariably Marxists, and useful idiots like Carroll and professional athletes are mainstreaming these odious ideas.

Carroll is right about false history being taught, but it’s the Howard Zinn and Karl Marx communist critique of America that’s being taught in today’s government schools.

“The Communist Manifesto” and Zinn’s “A People’s History of the United States” remain two of the most assigned books on college campuses.

Far-left author Ibram X. Kendi argues in his alarmingly popular book “How to Be an Antiracist” that any society that does not have equal outcomes is discriminatory, and therefore discrimination is necessary to create equity.

This is socialism, folks.

It’s just dressed up with emotional pleas and false narratives.

And Pete Carroll is willfully parroting it.

If this is going to be the norm in the NFL, then the league is on a slow ride to the bottom.