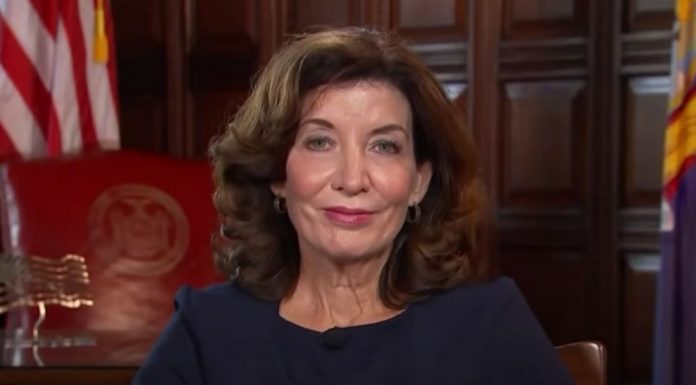 New Yorkers must have a fetish for having idiots be their Governor.

They just got rid of Cuomo but their new Governor just made it clear that she is even more radical than he ever was.

New York’s new Governor just demanded that a church be her disciples in spreading “God’s vaccine” to the dumb.

New York is showing that when it rains, it pours.

The Empire State was cursed with a rapist dimwit as Governor in Andrew Cuomo.

When Cuomo wasn’t grabbing the butt cheeks of his staff, he was killing grandma in the nursing home with COVID.

So when Cuomo resigned as Governor, many thought that it couldn’t get any worse.

Well have no fear, the Left’s new chosen one in New York is even more radical than Andrew Cuomo.

When Kathy Hochul took over the Governorship from Cuomo, everyone thought it would be a step in the right direction.

Well, come to find out she is more radical than Cuomo is.

And here is a prime example why.

While Governor Hochul was speaking at a megachurch in New York she started to claim that the vaccine must be forced on others because it came from God.

In her thoughtless rant, she claimed:

All of you — yes, I know you’re vaccinated, you’re the smart ones — but you know there’s people out there who aren’t listening to God and what God wants. … You know who they are. I need you to be my apostles. I need you to go out and talk about it and say, ‘We owe this to each other! We love each other!

You can watch her full remarks on the vaccine below:

NEW – NY Governor Hochul proclaims, "The vaccine comes from God" and asks those present in the megachurch congregation, "I need you to be my apostles."pic.twitter.com/naPWVWX0nk

The sad thing is that many Christians are more willing to confront their fellow Christans over the vaccine rather than confronting them over babies getting murdered in the womb as they are ripped apart limb to limb.