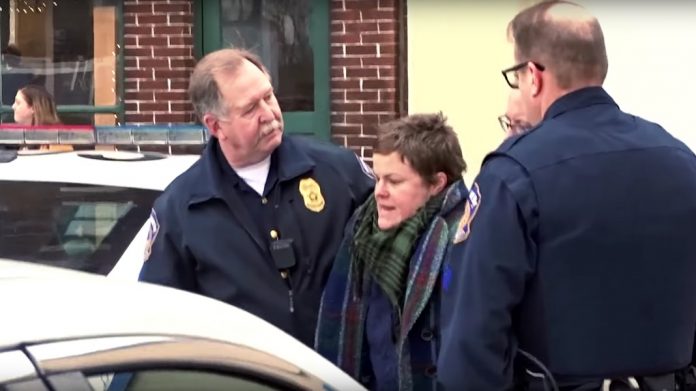 Now you won’t believe what was desecrated when these Christians dared pray over “Drag Queen Storytime.”

Nothing is sacred to the radical leftists.

A group of Catholics were peacefully praying the Rosary outside of a public library in protest of the so-called “Transgender Storytime.”

Transgender Storytime is when public libraries and schools bring in drag queens to read to children as young as kindergarteners.

The group of peaceful protesters brought with them a statue of the Virgin Mary.

Then a radical LGBT activist walked up, grabbed the Virgin Mary and threw it on the ground, busting the statue to pieces.

New video from the American Society for the Defense of Tradition, Family and Property (TFP) shows a pro-transgender activist damaging a statue of the Virgin Mary as Christians prayerfully protested a “Drag Queen story hour” for children at an Indianapolis bookstore.

The shows a scramble when a woman lifted up and apparently dropped a statue of the Virgin Mary that stood in the midst of Catholics, including children, as they prayed. According to TFP, it was the intervention one of the praying men, Christopher Dunlap, that prevented the statue from breaking on the pavement. Witnesses said that the the young woman wrapped her arms around the statue and threw it to the ground, but Dunlap intercepted its fall.

As a result of the incident, the base of the statue broke off and its crown was damaged.

This is yet another display of the intolerance of the Left’s so-called “tolerance movement.”

You’d think confusing and bewildering young children by parading men in dresses around in front of them and reading them stories would be a line even the most radical leftist wouldn’t cross.

But being allowed to have their “Transgender Storytime” is not enough for the radical leftists.

When concerned parents speak up and peacefully pray in protest, they will be attacked and called “bigots” by the LGBT radicals.

As the video shows, pro-transgender activists have become so unhinged, they’ll even desecrate a statue of the Virgin Mary if you dare oppose them.

We want to know your thoughts.

Will transgender activists see a backlash for desecrating a Virgin Mary statue and holding storytimes for kids hosted by drag queens?

Answer below in the comments.