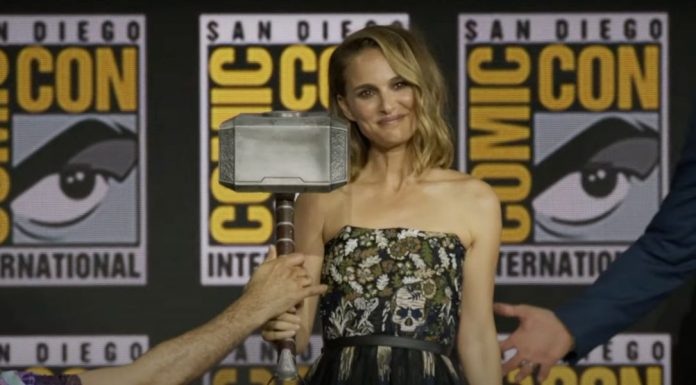 Hollywood is full of hypocrites.

Tinsel Town leftists routinely get caught doing exactly what they berate the public about.

And Disney star Natalie Portman just made one jaw-dropping statement.

The film is currently Disney’s top B.O. earner in theaters, trouncing the company’s Lightyear flop at the box office.

Like Lightyear — the latest spinoff from the Toy Story franchise — Thor: Love And Thunder marks another return to the well for Disney in more ways than one.

It is also remarkably “gay,” according to its leading lady Natalie Portman.

Disney is the biggest entertainment company in the world, and it looked unstoppable.

The brand is under assault… from within.

“Woke” leftists inside Disney are hellbent on infusing activism into their storytelling.

Now Marvel movies, which are under the Disney banner, are trending “woke” too.

And Portman is celebrating the characterization of Thor: Love and Thunder as the “gayest” movie in the Marvel Cinematic Universe (MCU).

Film critic Andrew Freund interviewed Portman and asked her if the movie was “the gayest movie ever made in the MCU?”

Portman responded, “I love that reading of it… Yes, I love that.”

Every facet of society must be infused with wokeness, even action movies intended for kids.

No matter how factually accurate it might be, you can bet if a non-leftist actress characterized a film as “gay” they’d be canceled immediately.

Of course, leftists are free to “evangelize” with the word all they want as long as it’s serving their secular wokeness religion.

Freund gushed, “I mean, you’re flying on rainbows, or am I imagining it? … I loved how gay it was!”

Disney has recently been embroiled in controversy after going to battle with Florida Governor Ron DeSantis over the so-called “Don’t Say Gay” bill.

That modest proposal sent Disney activists up a wall, and they cudgeled CEO Bob Chapek into publicly opposing the bill.

The war with DeSantis backfired, and Disney was stripped of a special tax and regulatory dispensation.

There has to be some incentive for leftist companies to impose their will on people.

Democrat politicians have been doing this for years, such as blocking Chick-Fil-A restaurants from opening up because CEO Dan Cathy believes in traditional marriage.

Disney has also seen its stock price plummet as far-left executives within the company were caught in leaked videos talking about their “not-at-all-secret gay agenda” and their victory in removing gendered language from theme parks, such as “ladies and gentlemen.”

Disney was a family company that promoted traditional values, but it has been co-opted by leftists, a phenomenon that has happened to many institutions.

The Star Wars franchise is on life support after several missteps by Disney to make the franchise more “progressive.”

The entertainment industry seems intent on alienating as many people as possible.

But “woke” elites are pandering to a small sliver of the population.

Leftism ruins everything it touches.