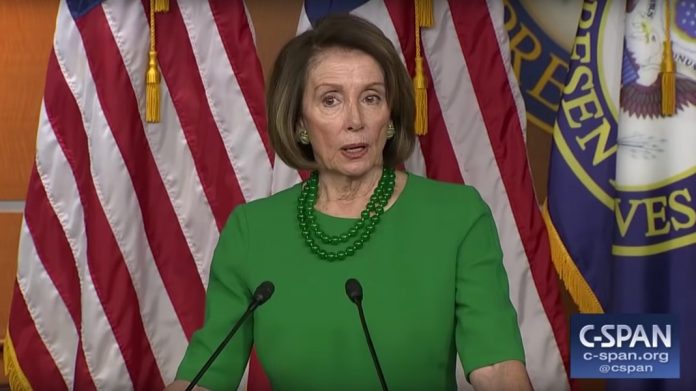 Leftists are always pushing the next set of talking points in increasingly maddening ways.

But rarely do they ever mention religion as most leftists sizzle when holy water is tossed their way.

And Nancy Pelosi put everyone in shock with what she just claimed about God.

Politics is always about pushing issues voters care about.

But one oddity in American politics is the Left’s obsession with pushing the Green New Deal even though the vast majority of Americans are against everything in it.

Nothing says a political talking point like blaming poor families and farting cows for killing off the whole human race.

But one thing that the Left loves to do more than scream about global warming is attack Christianity.

That’s why Nancy Pelosi put everyone in shock last week when she used the name of God to push her radical global warming agenda.

Leftists are desperately trying to push their “Build Back Better” plan on the American people.

But so far the American people aren’t buying their load of crap that is in the plan pushed by Biden.

So now they are getting desperate.

Things are so desperate that Nancy Pelosi has found religion.

When asked about the disastrous plan’s ability to push the global warming narrative, Pelosi claimed “For me, it’s a religious thing.”

And while everyone was in shock to learn that Pelosi believed in religious morality, she continued by saying “I believe this is God’s creation and we have a moral obligation to be good stewards.”

Pelosi says protecting Earth "is a moral issue if you believe, as I do, that this is God's creation and we have a moral obligation to be good stewards. But even if you don't share that view religiously, we all share it morally, that we have a responsibility to future generations" pic.twitter.com/NXefGXE2Ps

So climate change is a religious issue but she claims you shouldn’t push your religious beliefs about the slaughtering of tens of thousands of babies in the womb.

Thank God there weren’t any thunderstorms around or he might have taken his shot to Epstein Pelosi for using his name to push such filth.