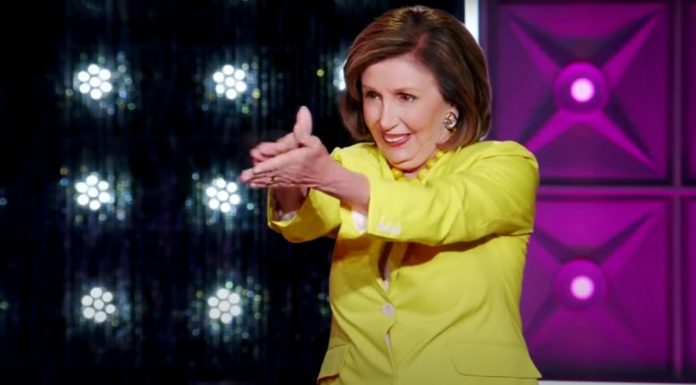 The Democrat Party and Hollywood are one and the same.

Nancy Pelosi is out to prove she’s scuzzy enough for both.

And she made one statement during a gut-churning TV show appearance that utterly humiliated America.

This time it was Hollywood’s turn to welcome a politician for an impromptu campaign speech when House Speaker Nancy Pelosi appeared on RuPaul’s Drag Race for the second time.

Pelosi said to the assortment of drag queens, “My honor to be here, to say to all of you how proud we are of you. Thank you for the joy and beauty you bring to the world… Your freedom of expression of yourselves in drag is what America is all about.”

Ah, yes, America is all about drag queens.

Over the past few years, Democrats have proven that they do not care at all about freedom of speech or freedom of expression.

Pelosi added, “The single most important thing I can say is to vote. With the midterm elections coming up it’s very important for people to make their voices and their vote heard.”

Pelosi is pandering for votes on reality TV because the Democrats are facing a shellacking in the midterms.

RuPaul fawned all over Pelosi and said, “Well thank you so much for the work you’ve done and the work you continue to do tirelessly for our freedom. Your tenacity is something that we all look up to.”

RuPaul obviously was not talking about the freedom to refuse an experimental vaccine that didn’t even prevent infection.

The Democrats have become insanely radical.

They are openly promoting events such as Drag Queen Story Hour — where drag queens in full costume read books to small children at the library — stripping drag shows with kids in the audience, and even drag shows where kids perform on stage for adults.

It’s truly despicable behavior, and the Democrats not only defend it, but forcefully promote it.

Unsurprisingly, one of the leaders of a Drag Queen Story Hour event was recently arrested for child pornography.

Other drag queens who have read to kids have been registered sex offenders too.

The Left’s push to indoctrinate kids with transgender agenda is what sparked Florida Governor Ron DeSantis to sign the Parental Rights in Education Bill into law, and he’s looking into criminalizing taking kids to drag shows.

DeSantis said, “You had this [in] Dallas, Texas, you had these very young kids and they must have been like 9, 10 years old at a quote ‘drag show’ where they were putting money in the underwear…and that is totally inappropriate…Now it just seems like there’s a concerted effort to be exposing kids more and more to things that are not age-appropriate.”

The Left have gone so far to the fringes that they have turned parents into an activist group and a potent voting bloc.