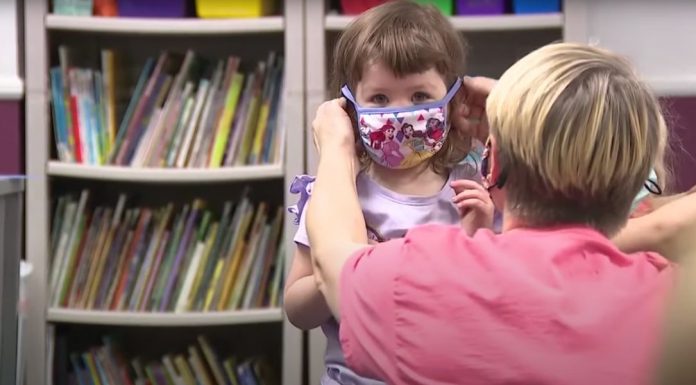 They’re about to eat crow over it.

And Nancy Pelosi and Chuck Schumer will regret trying to pin this one scandal on Donald Trump.

Democrats laid the Obama-era “kids in cages” scandal at Donald Trump’s feet ahead of the 2020 Election.

But one jaw-dropping video shows their Faucian COVID regulations led to American kids in cages.

The World Health Organization and even some of the most left-wing newspapers in the country have admitted mask mandates have not been effective in stopping the spread of COVID.

And as more students start standing up for their rights, one school district in particular is going to extreme measures to compel compliance – some may even describe it as child abuse.

The fact is, in Oakdale, CA, the school district is resorting to prison-like tactics to punish students refusing to wear a muzzle.

The district’s latest indignity was literally locking the students in an unheated gymnasium.

School staff even barricaded the doors with tables, which has to be a fire hazard.

Police officers were called to the scene and at least ordered administrators to turn on the heat for the students.

Oakdale CA students throughout the district are refusing to wear masks. High schoolers have been sent to the gym and filled it with more unmasked students on their way.

These kids are following the governor’s example and we are here to legally support their rights. pic.twitter.com/6cDZOkWvpv

You’ll notice in the videos, the kids aren’t receiving an education in the gym.

They’re just sitting around serving out their punishment during school hours.

Other students are now standing with their oppressed peers.

According to reports, more than 500 students across the Oakdale school district unmasked in solidarity.

Unmasked Oakdale Students who were denied entry into class + the gym walked from the high school to the district office which is about a quarter of a mile away. Oakdale is not honoring their right to in person education so our legal team is sending demand letter. #LetThemBreathe pic.twitter.com/wPsIpmbwwm

According to Red State Reports, in a separate incident from the same school district, an 8-year-old was forced to sit outside in 43-degree temperatures, simply for not being masked.

The district called Jennifer Poth to pick up her elementary student son.

But Jennifer wasn’t ready to comply.

“They called me to ask me to pick him up, and I refused,” Poth said. “I said, No. It is your job to educate my son, and he has every right to be there.’”

The school Superintendent Dave Kline admitted to fault in this case.

“That was a mistake,” Kline admitted. “That was a miscalculation on my part, and I took responsibility for that. I apologize to both parents that that [sic] took place. That is not how we want to treat our students. We still want to be respectful.”

That may not seem bad, but remember, this is California we’re talking about, kids aren’t accustomed to such low temps.

With the threat of COVID all but gone and the science proving Democrats’ Faucian policies haven’t helped, there is one big question remaining.

That’s whether voters will revolt against the Democrats responsible at the local, state and federal levels and boot them all from office in November.

The good news is, it’s looking more and more like Nancy Pelosi and Chuck Schumer will get booted from power this fall.