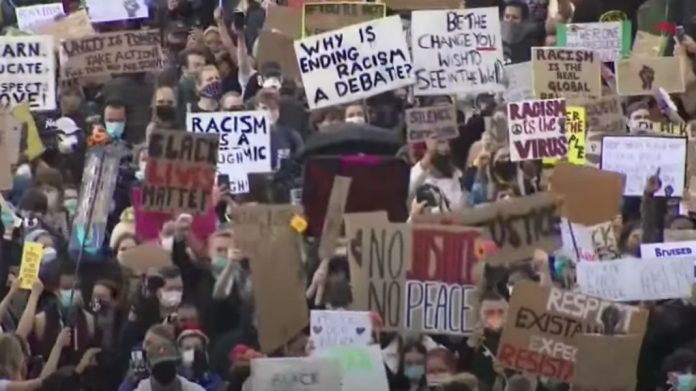 By now Americans are used to Black Lives Matter terrorizing the streets at night.

But usually, the police do their best to enforce the law when Black Lives Matter is breaking the law in broad daylight.

And motorists were in shock as a Texas cop allowed Black Lives Matter to harass drivers and blockade a highway.

Last summer seems like years ago with everything that has happened since.

But it wasn’t that long ago when Black Lives Matter was terrorizing communities around the nation.

They were doing whatever they could to subject bystanders to their radical agenda.

And usually, especially during the daytime, police officers would do their best to protect the community from Black Lives Matter’s reign of terror.

This was even more so the case in conservative-run states and communities.

But it looks like many Americans’ last line of defense is starting to cave.

Recently, at a busy intersection in Texas, Black Lives Matter radicals decided to block the street to subject motorists to suffer.

They were blatantly breaking the law and should have been arrested.

But shockingly, as one motorist who was rightfully upset by the blockage tried to get the radicals to move off of the street, a police officer shooed him away and was threatening him with arrest.

The disgruntled motorists went up to the police officer after facing off Black Lives Matter and said, “get these f***ing people out of the way! They can’t be standing in the middle of the road!”

And the cop was having none of the man’s complaints as he rushed him away from the intersection.

You can see the video below:

What would happen if someone was having an emergency or a life threatening issue and couldn’t get help because of the road being blocked?

Hopefully it isn’t the new normal for cops to allow Black Lives Matter to reign terror in our communities without any recourse.