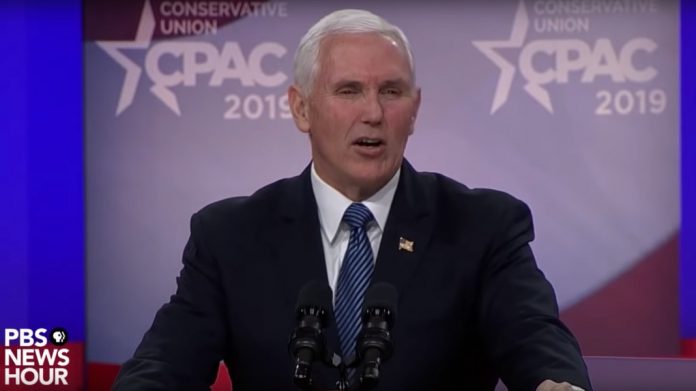 Vice President Mike Pence has never been afraid to stand up for his Christian values – even when he is viscously attacked for them.

And you won’t believe who is attacking the Vice President’s faith this time.

The Vice President has become a popular target of the secular left and radical “progressive” base of the Democrat Party.

Pence is regularly ridiculed by LGBT activists for disagreeing with their twisted agenda.

Now, students at a Christian university in Indiana are turning their backs on him, claiming the administration’s policies are not consistent with Christianity.

Vice President Mike Pence is getting pushback from Taylor University students and alumni after the small evangelical Christian school tapped the former Indiana governor to be this year’s commencement speaker.

Over 3,300 people have signed a change.org petition to get Pence’s invitation to the mid-May commencement ceremony rescinded, claiming the “Trump-Pence Administration’s policies” are “not consistent with the Christian ethic of love we hold dear.”

One Taylor grad said the school, “should be ashamed…I am physically shaking…I feel personally attacked,” but not all alumni agree and Taylor officials said they are standing by their decision.

The left is doing everything they can to embarrass Vice President Pence before his speech at Taylor University.

In 2017, liberals organized a shameful walkout when Pence gave a commencement speech at Notre Dame.

Now, they are trying to pull off the same stunt again.

Famed evangelist Franklin Graham admonished the outraged students and alumni through Facebook using the Apostle Paul’s words, “You foolish Galatians! Who has bewitched you?” (Galatians 3:1)

Graham noted that so far the University’s President has stood firm and the speech is still scheduled as planned.