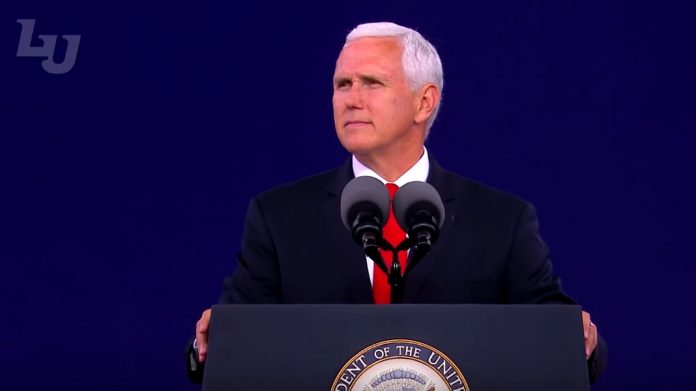 Conservative Christians look up to Vice President Mike Pence for living out his faith.

But doing so has made him a regular target from the radical secular Left.

And Pence just delivered a warning to thousands of young people that everyone needs to hear.

It only escalated after he joined President Trump’s campaign in 2016.

Radical leftists have even gone so far as to attack his wife for teaching art at a Christian elementary school.

So in his commencement address at Liberty University, Pence delivered a dire warning to the crowd.

“Be ready,” Pence told them.

The truth is, we live in a time when the freedom of religion is under assault.
…
[W]e live in a time when it’s become acceptable and even fashionable to ridicule and even discriminate against people of faith . . .
You know, it wasn’t all that long ago that the last administration brought the full weight of the federal government against the Little Sisters of the Poor merely because that group of nuns refused to provide a health plan that violated their deeply held religious beliefs. And when the state of Georgia recently was debating legal protections for the unborn, a bevy of Hollywood liberals said they would boycott the entire state.
…
[T]hroughout most of American history, it’s been pretty easy to call yourself Christian. It didn’t even occur to people that you might be shunned or ridiculed for defending the teachings of the Bible.
But things are different now. Some of the loudest voices for tolerance today have little tolerance for traditional Christian beliefs. So as you go about your daily life, just be ready. Because you’re going to be asked not just to tolerate things that violate your faith; you’re going to be asked to endorse them. You’re going to be asked to bow down to the idols of the popular culture.

That’s a message Christians of all ages need to hear, regardless of their background.

Pence pointed out that this administration is committed to defending Americans’ religious freedoms.

But with the 2020 elections just around the corner, it’s worth noting comments from Democrat presidential candidate Cory Booker that underscore how not every administration would be.

Discussing his desire to implement extensive gun control measures, Booker mockingly said, “We’re not gonna give thoughts and prayers, which to me is just bulls**t . . .”

Pence was right to warn that Americans’ freedom of religion is under assault. The question is, will anyone listen?