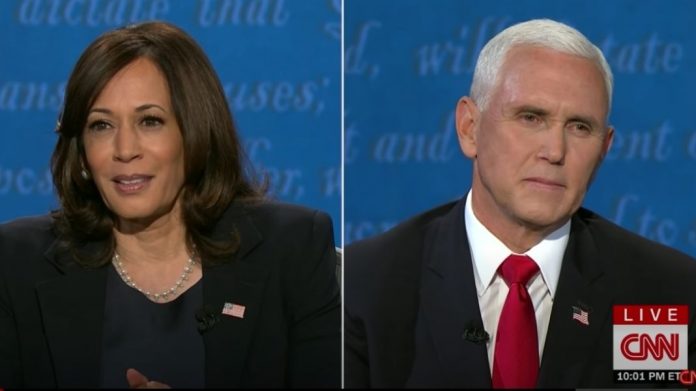 Democrats have become a party directly opposed to Christian values.

They don’t even mention God in their party platform.

And Mike Pence just cornered Kamala Harris on an anti-Christian plan she doesn’t want you to know about.

While Democrats clearly have a strong anti-Christian platform, they don’t want voters to know that.

Joe Biden considers himself a devout Catholic despite the fact that his pro-abortion policies go so far that he supports taxpayer funding of abortion.

Barrett actually is a devout Catholic who has consistently stood up for her values, including having a flawless pro-life record.

The Left is attacking her over this, and is even going so far to attack her for having too many children.

Voters are beginning to see just how anti-Christian they are through this ordeal, and it will only become clearer once the confirmation process begins.

This is why Trump’s nomination of Barrett is such a great move, and will assist him in the election.

Vice President Mike Pence capitalized on that during Tuesday’s debate with Kamala Harris.

Pence was asked about Barrett, and he made clear his support of her.

“President Trump and I could not be more enthusiastic” about Judge Amy Coney Barrett, Pence began. “We hope she gets a fair hearing, and particularly hope we don’t see the attacks on her Christian faith that we saw before.”

Democrats have already attacked her for her faith, with Sen. Dianne Feinstein telling her that “the dogma lives loudly within you” during her 2017 confirmation hearing to a circuit judge position.

Harris tried to fire back by claiming that both her and Biden, who are ardently pro-LGBT and pro-abortion, are “both people of faith, and it’s insulting to suggest we would knock anyone for their faith.”

Pence then hit her with perhaps the most important question at the debate.

“I think the American people really deserve an answer, Senator Harris: are you and Joe Biden going to pack the court if Amy Coney Barrett is confirmed?” Pence asked.

Harris tried to change the subject continually, and debate moderator Susan Page refused to zero in on her for an answer.

That’s when Pence said, “If you haven’t figured it out yet, the answer is they are going to pack the court.”

Packing the Supreme Court would be the Democrats’ way to prevent the will of the American people who gave Republicans the Presidency and the Senate, which gives them the ability to confirm Barrett.

It is an insidious scheme to ensure that the Democrats can codify their extreme anti-Christian views in the courts.