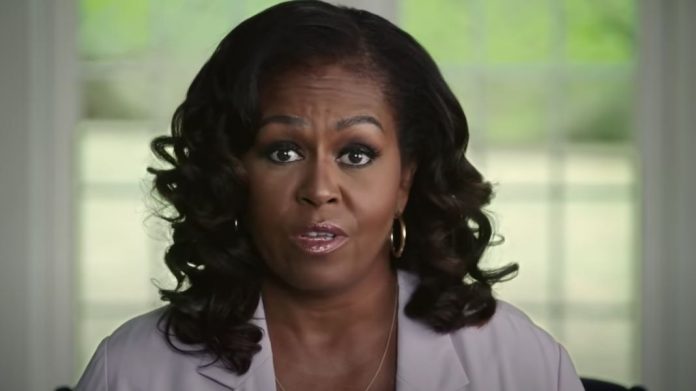 Since her husband left the White House, Michelle Obama has been grasping for the spotlight.

She has found her place as an anti-Trump activist.

And Michelle Obama just teamed up with another Hollywood star for this anti-Trump scheme.

Even without control over the government, like she had when her husband was President, Michelle Obama still has powerful friends.

Most notably of these are the elites in Hollywood.

Hollywood controls virtually all of the entertainment that Americans consume, giving them a lot of power over culture.

The great Andrew Breitbart once said, “politics is downstream from culture,” making influence over Hollywood a very appealing thing for somebody like Michelle Obama.

Not only has Michelle Obama received awards from Hollywood, like a Grammy for the audio version of her book, she has her own production company along with her husband.

They produce movies for Netflix, which is the most popular movie streaming website in the world.

Many of those movies are anti-Trump, and are viewed by many millions of people.

But it isn’t just their movies that they are using to attack Trump.

Michelle Obama is leading a new group to promote vote-by-mail.

Her group, called When We All Vote, has held events with dozens of major Hollywood stars.

And now she is adding another to the line-up, hosting an event with Pop star Jennifer Lopez.

The two held a voter drive to get voters to the polls.

And while they claim to be non-partisan, it is clear their goal is to turn out anti-Trump voters, and encourage the use of mail-in votes, which is rife with fraud.

“Voting Don’t Cost a Thing — except a small amount of your time,” the group wrote on Twitter, which is a play on the words in one of Lopez’s songs. The Tweet includes a video with Obama and Lopez, “remind[ing] us that we are all in this together this election season.”

“And if anybody has any questions about where, how, what to do, go to when we all vote dot org, all the information is there,” implored Michelle Obama. “You don’t have to figure this out on your own. There are a lot of people around who can tell you how to get a mail-in ballot, how to vote by mail, how to vote in person.”

Already there have been many cases of vote-by-mail causing issues.

Ballots supporting Trump have been found thrown out, and in other places, the ballots have been misprinted.

And in many cases, people are getting ballots for former residents at their address, or even deceased family members.