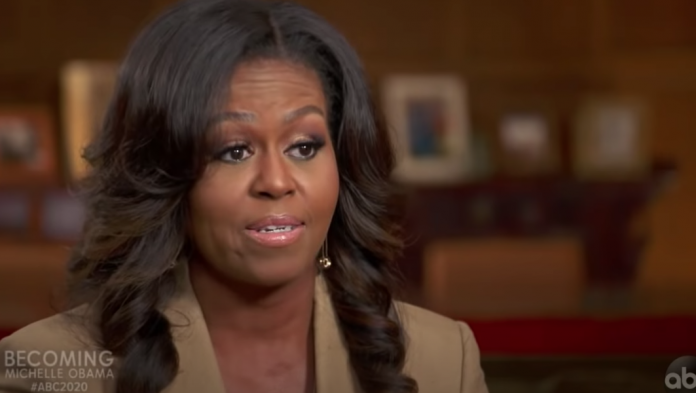 Despite spending her entire career leeching off her husband’s accomplishments, the Left looks to Michelle Obama as a role model.

They continue to shower her with praise and awards.

And she just scored a huge Hollywood film role that could put her in the White House.

After leaving the White House, Michelle Obama has done everything she can to stay in the spotlight.

She has refused to take the lead from other former First Ladies by staying out of politics, and instead has used her platform to bash President Trump.

Now, along with her husband, she has partnered with a film studio, which pushes movies to Netflix.

Along with this, she released a new book, Becoming.

The audio-book version even won a Grammy Award, showing just how much Hollywood loves her.

But the book isn’t enough for her.

Netflix just announced they are releasing a documentary focused on her 34-city book tour for her book.

“Becoming is an intimate look into the life of former First Lady Michelle Obama during a moment of profound change, not only for her personally but for the country she and her husband served over eight impactful years in the White House,” a Netflix press release states.

“The film offers a rare and up-close look at her life, taking viewers behind the scenes as she embarks on a 34-city tour that highlights the power of community to bridge our divides and the spirit of connection that comes when we openly and honestly share our stories.”

This documentary will surely add to their massive fortune the Obama family has amassed since leaving office.

Her book deal alone was reportedly for $65 million, with their deal with Netflix netting another $50 million.

The couple even bought an $11.5 million home in Martha’s Vineyard on top of their two other homes.

This new documentary also fuels speculation that Joe Biden will choose the former First Lady as his Vice President pick to challenge Trump in November.

Biden has stated that he would pick her “in a heartbeat,” but that he isn’t sure if she will take the job.

She may be more than happy with her Hollywood fame.

In her eyes, having to serve as second in command would likely be seen as a demotion, especially with somebody like Joe Biden at the top of the ticket.

Do you think Michelle Obama will be Joe Biden’s Vice President pick?