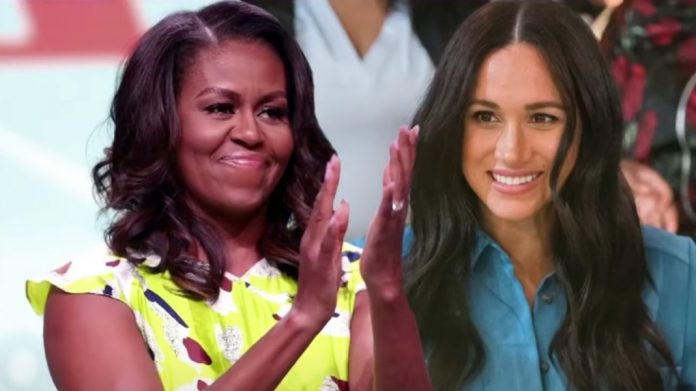 And she is now leveraging her connections to work against President Trump.

But she isn’t done, and now Michelle Obama is colluding with Meghan Markle to rig the election against Trump.

Ever since Meghan Markle married her way into the British Royal Family, she and her husband Prince Harry have ditched every norm expected of the family.

They proved how different they are when they abdicated their positions and titles as the Duke and Duchess of Sussex.

The couple were subsequently cut off from the family’s coffers, and Prince Harry was forced to give up his military ranks.

Proving rumors that Markle made the move so she could grow her own brand, she moved to Los Angeles to be close to the Hollywood elites.

When she moved to Los Angeles, the two were expecting special security from the U.S. government.

Trump quashed that short-lived belief in a harsh statement.

“It was reported that Harry and Meghan, who left the Kingdom, would reside permanently in Canada,” President Trump tweeted. “Now they have left Canada for the U.S. however, the U.S. will not pay for their security protection. They must pay!”

Since then, the two have made President Trump their main enemy.

So naturally, Markle is now teaming up with Michelle Obama.

The two hosted a joint-event for Obama’s “voter registration” group, When We All Vote.

At the event, they celebrated the 100th anniversary of the 19th Amendment, which gave women the right to vote.

The goal of the event was to reach 300,000 eligible women voters.

And it is clear that the voters they are trying to reach are not fans of President Trump.

Markle’s involvement in this is sure to be a headache for the Royal Family.

British Royalty are expected to avoid accusations of political alliances.

But Markle has never cared about that, considering she has already gone on rants attacking President Trump, previously calling him “divisive” and misogynistic.”

Michelle Obama will clearly work with anybody in her anti-Trump crusade.

First it was Hollywood, and now she is working hand-in-glove with British Royalty.